After a summer full of sample knitting for patterns, I was eager to get a bunch of personal projects off the needles once fall hit. I’m happy that I’ve managed to finish a few things recently, and I thought I’d share a few photos with you all.

First up was my Garland sweater (which I initially wrote about planning to knit in this post, and I gave a little progress update here). I started it back at the beginning of May, but it got set aside when I needed to dedicate my knitting time to work knitting, and then it got packed with all our stuff in the move from Norway to Montréal, so when I was finally able to pull it out of a moving box in mid-October I was super eager to finish it (it was really close!).

I will admit that I had some moments of doubt while this project was a work in progress, because both the color and the silhouette of the sweater are not my usual wheelhouse. I’d also never knit a sweater with laceweight yarn before. As a result, the finished garment was a pleasant surprise, because this is easily one of my favorite sweaters to wear that I’ve ever knit. The light weight of the fabric makes it super wearable and great for layers, and the cropped length means it’s easy to layer over long shirts with jeans or skirts and dresses, which means it’s one of the more versatile sweaters now in my wardrobe. It’s very comfortable but there’s a casual elegance about it too, with the bands of lace and the way the ribbed sleeves hug my arms without feeling tight.

I also finished what I’ve called my Pewter Cowl, a simple 1×1 ribbed cowl in Woolfolk Tynd.

This was my mindless bus knitting project for months – something I could pick up and put down to work on whenever I had a moment without ever needing to refer to a pattern. It took me a long time to figure out what I wanted to make with this yarn (Woolfolk’s wool is very, very soft) and in the end a simple and easy-to-wear project felt like the right way to let the yarn do the talking. The softness means it’s suitable for against-the-neck wear, and it’s relative lack of sturdiness will be less of an issue as a cowl than it would have been if I’d made mitts with this yarn, as I intended when I purchased it three years ago. I’m really pleased with this, but now I think I need a new mindless 1×1 rib project to work on…

The last piece I want to share is my finished Circlet Shrug. The pattern is by Norah Gaughan, a creative force when it comes to cables, and she originally designed it for the third issue of Making magazine, which came out this past spring. (She will be releasing it as an individual pattern in the coming days, but I suggest checking out the whole issue of Making, because it’s a beautiful issue!) 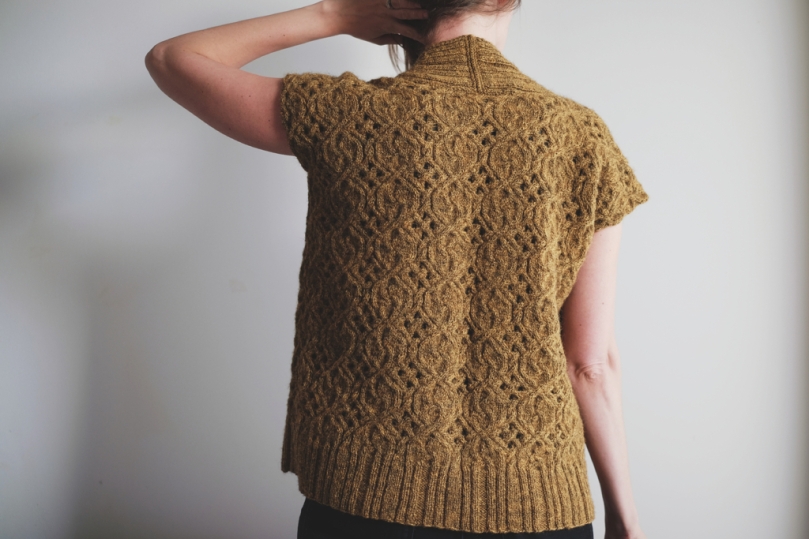 This knit needed a lot of attention – there are cables every other row for the entirety of the sweater (save the bottom ribbing), and I had maybe almost memorized the chart by the time I was working the final repeats of the back. But it was a super interesting knit nonetheless, and I really adore the finished fabric. The Hillesvåg Tinde has such depth as a yarn, and I’m so pleased with how it’s worked up into these cables. This was the last yarn I bought before we left Norway, so it’s a bit of a special souvenir. I finished this the week after Rhinebeck, which I had originally hoped to knit it for, but given the temps we had during the days, I’m happy I didn’t push myself to stress out over finishing.

Even though I design patterns myself, there is so much joy for me in getting to knit some of the beautiful pieces that my friends and colleagues have designed. But not to worry, I am working on more of my own patterns, too – I’ve also recently bound off on a garment design for an upcoming Paper Tiger collection! But more about that on another day. What are you all working on as we head into the tail end of the year?