I actually have a new pattern to share with you today! I am beyond thrilled to be part of the newest volume of the Mason Dixon Knitting Field Guide series. The newest book is volume 3, with the theme WILD YARNS – and my pattern is a sweet little cowl called Leif. I wanted to tell you a little bit about it, but I also wanted to rave about the process of working with MDK, so a full blog post felt warranted!

If you’re unfamiliar with Mason Dixon Knitting, the website was originally started as a daily-letter-style blog by Ann Shayne and Kay Gardiner, writing back and forth to each other about knitting from Nashville and New York, respectively (hence the name). They published two books which are the stuff of early 2000s knitting legend (at least in my mind – see Mason Dixon Knitting and Mason Dixon Knitting Outside the Lines), and they gave their website a total overhaul last year, turning into a source of daily inspiration for crafty folk. Basically, check it out if you haven’t!

As I mentioned before, the theme of Field Guide volume 3 is wild yarns, and while you may not think of me when you hear those two words together (I currently have not one but two entirely greyscale stranded colorwork garments on the needles, you guys), when Ann got in touch and asked if I was interested in doing a pattern for the next Field Guide using Spincycle Yarns, it was one of the easiest “yes” decisions I’ve ever made. I know Rachel and Kate of Spincycle, who are both awesome ladies and really talented spinners. For the first eight years of the company, all of their yarns were handspun by them – today, to meet demand, they make use of a local micro-mill that allows them to produce more yarn but maintain the feel and the spirit of the handspun product they started with. Their yarns are beautiful and I’ve been happy to work with them before (in fact, there are a few other designs in the pipeline that use Spincycle yarns!).

Ann said that she and Kay were interested in a colorwork cowl, and I was really happy to sketch up my ideas and send them their way. I have to say that the process designing this cowl was much closer to collaboration than anything else I’ve done – the final design varies in some significant ways from the original sketch and charts, and a lot of that was the result of working together with Ann to find a way to marry both of our visions in a pleasing and cohesive way (as well as some practical requirements, like putting a cap on the number of skeins of yarn the pattern could use). Every step of the process was a pleasure, from brainstorming with Ann to find the best ways to revise charts or construction techniques, to bouncing photos of swatches back and forth as we determined the best way to use two different colorways of Spincycle’s Dyed in the Wool together. Combining two colorways with long color shifts while also maintaining enough contrast between them to see the pattern was a unique challenge, but I’m so pleased with where we ended up! And a huge special shout-out goes out to the MDK Field Guide editor Melanie Falick, who selected the final colorways that were used for the samples.

The cowl does come into size options: one long enough to loop twice around the neck (as in the photo below) using four skeins total, and one that’s just a single loop, which uses half as much yarn.

If you plan to knit the Leif Cowl, I would recommend carefully considering your color choices if you plan to venture beyond the sample colorways. Spincycle’s Dyed in the Wool features a lot of colorways that contain medium shades, which might look distinct when they’re in hanks next to each other, but when knit up won’t actually have enough contrast to show the pattern well. My number one tip in this case is to be sure to look at the colorways you’re considering in greyscale, to get a sense of how much contrast they have between each other – going for a very light one and a very dark one will give you the sharpest result. I’ve taken a screenshot from the Spincycle website and pulled out the saturation in order to show you what I mean about many of the colorways being “medium shades”: 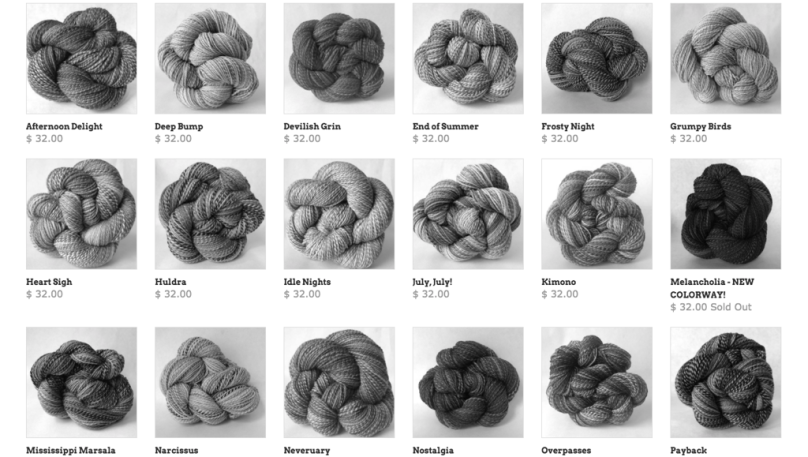 To compare, this was pulled from the Spincycle online shop, where you can view them in color (and the diversity of color may surprise you after looking at this black and white image).

If you’d rather play it safe and use one of the sample colorways, I’m happy to say that Mason Dixon is carrying kits in their online shop! The kits are available here and they’re for the yarn only, so the book must be purchased separately. The other two designs in this Field Guide volume are the Colorwash Scarf by Kirsten Kapur and the Easel Sweater by Sue McCain, and I’m so pleased to be sharing the pages of this book with them. The book is also available to order now, both as a paperback copy (with digital download included) or just as an ebook.

Thank you again to Ann and Kay for being so wonderful to work with – and for wanting to work with me in the first place!