I mentioned on Instagram this week that I’ve been in a little bit of a slump lately. I’m sure there are several contributing factors – the slog of mid-winter (and so far one with much less snow than usual), the feelings that come with the weird middle stretch of my thesis work (totally normal, but hard to shake all the same), and the political situation back in my home country (let’s just go with “it’s a mess” and not say any more about that here, shall we?). I also fell of the metaphorical horse with my exercise plan after several months of working out regularly and it’s been hard to find my way back in. Exercise makes a huge difference when you’re feeling down, or at least it does for me. Nonetheless, I feel like I’m on the upward curve again, thankfully.

A trip to Montreal at the end of January helped with that. I’ve been before, but it’s still not a city I know very well, so there’s so much to explore – and as a result, seemingly endless inspiration. I popped into La Maison Tricotée while I was there on a beautifully sunny Sunday, where I picked up a skein of sock yarn as a souvenir. That seemed like a great way to kick off a post of my upcoming knitting plans – and I think you’ll sense a theme: soothing, repetitive knits. 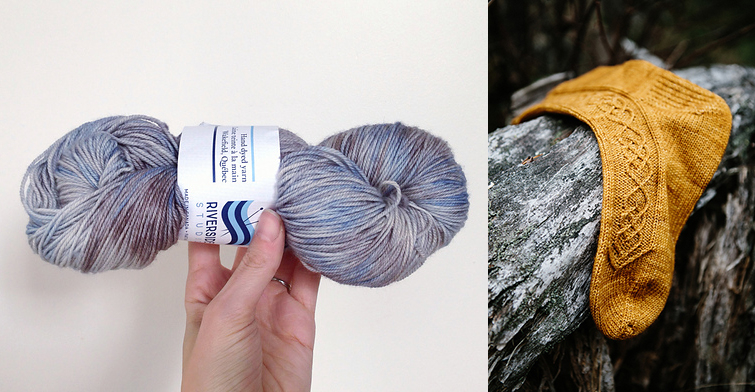 The skein of sock yarn I brought back from Montréal is Riverside Studio‘s Merino Cashmere Nylon fingering in the colorway Storm. I’ve knit exactly one pair of socks using a sock yarn with cashmere – these plain stockinette socks in Dream in Color’s Smooshy with Cashmere – and they shot to the top of my “favorites to wear” list almost immediately. The cashmere feels so luxurious. So when I saw a merino cashmere base at La Maison Tricotée, I jumped on it. Riverside Studio was new to me, but Kat is located in Farrellton, Québec, not too far from Ottawa, and it felt good to bring something home from a Québecois dyer. I like these colors, too, and the way they bring to mind winter to me – on some of Kat’s other bases, this color seems a bit bluer and more saturated, but something about the merino/cashmere/nylon base takes the color a little bit differently, and it really feels like it suggests snow, water in the mist, the sea reflecting snow clouds, and bare branches all at once.

I plan to make a pair of Siv socks with this yarn, from the first issue of Laine magazine. Another of my all-time favorite pairs of socks is my Twisted Flower socks, from the pattern by Cookie A – but I know that the allover traveling-stitches-and-lace pattern will be too much for me when I’m working to get my thesis done. Siv’s panel of traveling stitches feels like a nice compromise. But I won’t be starting these until I finish my current sock project… 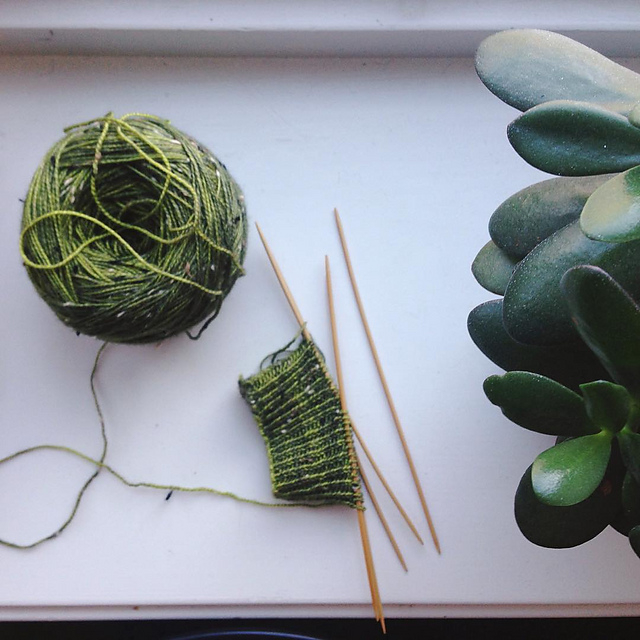 When I got back from Montréal I started a pair of Fika socks, with this springy green Jorstad Creek BFL Tweed Sock yarn. The twisted rib leg and stockinette foot definitely counts as repetitive and soothing right now, and I’ve wanted to make a pair of Fika socks since the issue of Pom Pom that they’re in first came out – nearly two years ago now. I’ve been wanting to use the yarn even longer – it’s been in my stash since 2013, since I bought it at Knit Fit in Seattle, where I had a booth at the marketplace and the Jorstad Creek both was right across from mine. I’m about halfway through the first sock now and it feels so good to finally use a yarn that’s just been languishing in the stash for years.

I’ve also been thinking about what I want to do with these two skeins of Woolfolk Tynd in Pewter. I bought them back in 2014 and I originally planned to make a pair of Fure armwarmers from Woolfolk’s first pattern collection with them, but I’ve gone this long without casting on even though I really want to work with this yarn. So I’ve come to terms with the fact that it’s probably not the right pattern for me (and besides, my Inglis mitts are plenty long for me, it turns out). Again, I’ve been thinking about patterns that are soothing and repetitive, which will fill a gap in my wardrobe, and I’m pretty sure some kind of simple cowl would be a good way to go here. The Woolfolk is really soft, which makes it an ideal next-to-the-skin sort of yarn, and a cozy cowl I can tuck into the top of my coat when it’s not cold enough for a big scarf sounds fantastic. I’m not totally set on this yet, but I’m thinking about Lilac Wine by Amy Christoffers, which is a perfect blank canvas for a really beautiful yarn to shine. (Note that Amy’s site no longer seems to be active, so clicking the link on Ravelry will give you an error message, but you can copy/paste the direct link into the Wayback Machine at archive.org to access it). For a stretchy cowl, the difference in yarn weight isn’t an issue.

There are more projects in the pipeline, but I’m trying not too get too ahead of myself as long as my thesis is my main focus. But these are some of the projects and yarns I’m looking forward to the most. Interestingly, two of these involve a lot of 1×1 ribbing and one involves traveling stitches – and I recognize that for some folks, neither of those things says “soothing.” So I’m curious: what kind of knitting is most soothing for you? Are there particular kinds of yarns, projects, or stitch patterns you gravitate towards when you want some easy comfort knitting? I’d love to know!