Hello there! October’s been busy. Or maybe “focused” is a better word. My whole time here, since arriving in Tromsø, has been quite focused. I think I’m feeling it more now than I did before because September had me entertaining visiting friends and family for a few weeks, and in August everything still felt so new, and there was so much work to do to start getting settled. But it’s been weeks without any of that and I’m beginning to realize just how much my uni program is dominating my attention.

I’ve been following along a bit with Slow Fashion October (and the Instagram hashtag #slowfashionoctober) and while it’s been really fantastic to see some of the conversations taking place, and I’ve even started drafting a few blog posts to join in, the truth is that that’s just not where my head’s at right now, you know? (Though I absolutely encourage you to check it out if you haven’t!) For two months I’ve been intensely focused on school: on so much reading, on trying to make sense of the syntax of Tagalog (not what I expected to be spending so much time on, but grad school is full of surprises), on trying to choose topics for term papers and presentations. I spend more time in the university library than I do in my lectures; it’s basically my second home. Add to that the fact that my husband’s in a very focused place as well (holed up at the home studio in our flat working on a film score), and that sense of focus is compounded. I think it’s turned me a bit antisocial.

Chris and I were talking this week and I realized that in the nearly three months since I’ve arrived in Tromsø at the beginning of August, I’ve left the island of Tromsøya maybe three times? And each of those three times was just across the bridge to the mainland, which is still part of Tromsø, either hiking or taking the cable car up Storsteinen (that mountain on the right in the photo above). Tromsøya’s not big: it has an area of 8.8 square miles, or 22.8 square kilometers (for the Pacific Northwesterners, that’s roughly the same as Cypress Island, which lies to the southeast of Orcas in the San Juans). I literally haven’t left Tromsø in almost three months; my world has been very small. I guess it’s no wonder I’m starting to feel a little restless, and October tends to bring on that feeling in me anyway.

But that doesn’t mean I haven’t been enjoying myself, though. I think the focused isolation actually suits me pretty well (what that says about me, I’m not entirely sure). There’s so much here that I actively appreciate on a regular basis. I love my commute, as weird as that sounds; the bus ride to campus is almost always beautiful and in the changeable weather it’s almost always different. The northern lights have been spectacular in the past few weeks (before the rain we’ve had for the past week started) – I can still hardly believe I can watch the aurora from my apartment windows. With the first storm of autumn a few weeks ago the mountains got their first dusting of snow (which has now mostly been washed or melted away, but it’ll be back soon enough). 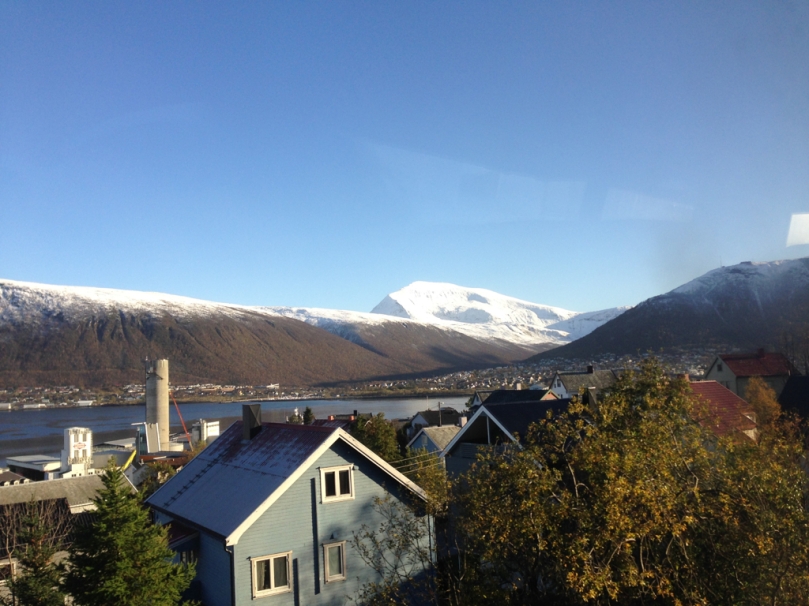 The student welfare organization recently held an informational meeting for new international students on how to cope with mørketida – the dark season. With the nonstop rain we’ve had for the past week, it’s feeling closer than ever. Because Tromsø sits so far north, there are two months in winter when the sun doesn’t rise above the mountains in the south. We’ll say goodbye to the sun on November 21st, but in the meantime the days grow increasingly shorter. And yet I find myself looking forward to the dark season. It’s an excuse to cozy up indoors (and it’s definitely helping with that academic focus I was talking about – it’s harder to be tucked away in the library when it’s nice out), to take some time to rest, to light candles and enjoy the quiet. I’ll also be getting out of town at the end of the month, finally, for a quick trip. I’m looking forward to that too.

More soon, I hope – but for now, it’s back to reading.