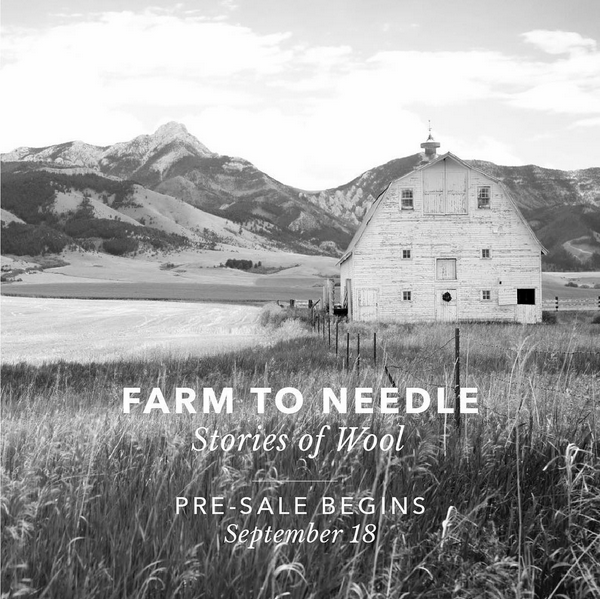 If you’re familiar with Tolt Yarn and Wool in Carnation, Washington, you can probably imagine how I felt when I received an email from Anna Dianich earlier this year … there was a book project she was putting together, and would I like to be involved? It was a no brainer, of course – YES, I said, even though I knew I had an international move on the horizon and a pretty packed to-do list. Some things are easy to make time for.

Anna described her idea for the book – a focus on yarns with that could be traced to the source, made from American grown wool, spun and dyed at American mills, often coming from single flocks. I’ve come to know some of these yarns through visits to Tolt and I’m so excited for the stories of who makes them to be shared in book form. I think many knitters have become increasingly interested in yarns from smaller producers over the last several years as they begin to ask where their fiber is actually coming from, a trend that parallels the farm-to-table trend in the food industry. When Tolt began producing their own Snoqualmie Valley Yarn (whose wool comes from a single flock of BFL/Clun Forest sheep), it was fitting that the labels said “farm to needle.” To me, this book project feels like such a natural extension of what Tolt does as a yarn store and as the core of a community. And appropriately the book itself, which will be released around Tolt’s second anniversary party on November 7, is titled Farm to Needle: Stories of Wool.

Here’s a short blurb from farmtoneedlebook.com:

“When we pick up our needles, cast on the first stitch, we become part of something much bigger than the project at hand. Farmers, shearers, spinners and dyers are working hard not only to produce the yarn we love, but to preserve a way of life that is at real risk of being lost. Farm to Needle: Stories of Wool invites you to join us on a journey; to peek behind the scenes of some of our favorite producers and gain a deeper understanding of the people, places, and animals at work. Discover Aspen Hollow Farm, Green Mountain Spinnery, Imperial Stock Ranch, Thirteen Mile Farm, YOTH, Saco River Dye House, and Twirl through patterns by Dianna Walla, Tif Fussell, Veronika Jobe, Ashley Yousling & Annie Rowden, Karen Templer, and Andrea Rangel. Photography by Kathleen Cadigan.”

I can’t tell you how thrilled and honored I am to be part of such a stellar lineup. We’re all looking forward to sharing more of the book with you in the near future – I’m quite proud of my pattern and I can’t wait for you to see it (it is, unsurprisingly, Norwegian-inspired, but that’s all I’ll tell you for now!). Farm to Needle: Stories of Wool is available to pre-order now at farmtoneedlebook.com and I hope some of you will be able to attend Tolt’s second anniversary party on November 7!