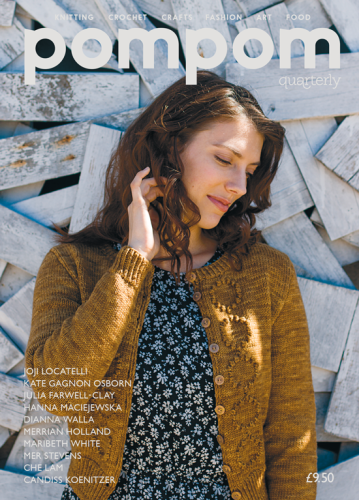 The preview of the spring 2015 issue of Pom Pom Magazine went up today, and I’m thrilled to have a design in this issue! When the call for submissions was first posted, I have to admit I got pretty excited. “Clean lines and shapes and Scandinavian minimalism” were the key words, so I was all over it. I had time to put a couple of submissions together, and fortunately one of them made it in! Here’s Swedish Pancakes:

I’m so happy with how these sweet little mitts turned out. One of my favorite things about working with third parties like Pom Pom or Brooklyn Tweed is that they often push me to work outside my comfort zone with colors (leave it to me and I’ll work with blue, grey, and green forever). My swatch for this stitch pattern was worked in white and blue, which is very typical for me, but I think the subtle pink and warm silver are a beautiful combination and I love the effect of the softened colorwork.

To explain the name of the mitts, we have to turn to the pattern motif. I’ve wanted to work with this colorwork stitch pattern for quite awhile – it’s very directly inspired by the exterior of a building here in Seattle: the Swedish Club. It’s a box of a mid century building which was completed in 1961 (around the same time the Space Needle was nearing completion, the year before the Seattle World’s Fair in 1962), and situated on the west side of Lake Union with a beautiful view of the lake and city. I first encountered the club when a friend suggested we try out their Swedish pancake breakfast back in 2010. Once there, we learned that the pancake breakfast is a monthly event that brings a thousand people through the doors in the space of a few hours, complete with folk bands and people of all ages, and it’s bucketloads of fun. I joined the club that very day. My relationship with the club goes beyond pancake breakfast, though – it’s also a pretty special building to me because it’s where I got married. If you’re in Seattle, I highly encourage you to check out the rather large calendar of events and find an excuse to go to the club. (Seriously – weekly happy hour, fiber arts open studio time, and dinners, movies, Swedish classes, car shows… there’s a lot to choose from.)

The south and east walls of the building feature an exterior layer of metal latticework in a geometric design of overlapping circles. It’s one of my favorite things about the building and I’m so happy to finally feature it in a colorwork pattern.

You can check out more views of the building on Flickr.

I also thought it would be fun to share a bit of memoribilia from the club. My husband Chris and I picked up this plate at one of their antiques & great finds sales:

It’s hard to make out in this photo, but I love that the plate features the original signage on the front of the building over the doors.

We also have a handful of these vintage swizzle sticks, which were handed down by Chris’s grandmother:

Thanks for indulging my love of this Seattle institution, and I hope you’ll feel inspired to check out the spring issue of Pom Pom! It’s available for pre-order now from the Pom Pom website, and you can check out the rest of the patterns on Ravelry. (I especially love Joji’s hat Vitsippa and the adorable Elske socks by Merrian Holland.)