I’ve been back from Norway for nearly two weeks and I’m finally settling in again and beginning to get back into a work flow. It’s so easy to forget how much of a buffer is sometimes needed between long travel and diving back into work. In any case, today I’m writing about the other half of the Norwegian Folkemuseum in Oslo: the indoor exhibits!

There are a host of different permanent exhibitions inside the main museum buildings (you can view the list here), my favorite of which were the exhibits on folk dress and folk art, and of course, the knitting history exhibit.

The gallery was dark, so as to protect the items on display, which means it wasn’t the best place to try and take photos of things (as is usually the case). I grabbed a few, though. In particular, I was pretty smitten with this chair: 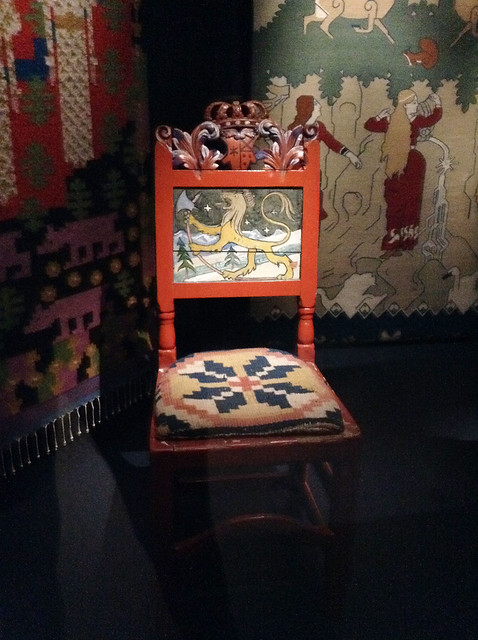 Between the carving, the painting, and the woven seat cushion, it’s a crazy and beautiful amalgamation of several different folk arts.

There was a wonderful description of the Husflidsbevegelsen, the home crafts movement that is the origin of the modern husflidslag:

“Due to the great changes that occurred in rural society during the second half of the 1800s, long-standing traditions in crafts gradually began to vanish. In order to halt this trend, and to combat unemployment and poverty, the home crafts movement arose in the 1860s. Starting in the 1880s, museums of applied art became involved in this movement, primarily in order to ensure high artistic quality, but also as a result of the national romantic spirit of the times. In 1891, three home crafts associations in Kristiania (later renamed Oslo) merged to form the Norwegian Association for Home Arts and Crafts [Den Norske Husflidsforening]. This association opened shops in the city, and established a contact network with producers all over the country. The home crafts movement flourished, and similar associations were established in many towns, and eventually throughout the country.”

The husflid movement is still going strong today, with organizations all over the country (you can find their website, in Norwegian only, at husflid.no). The closest equivalent I can think of in the U.S. would be the guild system, but it’s not an exact equivalent. A husflidslag from a specific area of Norway will be interested in protecting the regional crafts and styles historically specific to that area, for example, and they cover far more than just knitting. Many of the regional organizations have shops you can visit, and the national Norges Husflidslag has a shop on the bottom floor of the historic GlasMagasinet department store in the middle of downtown Oslo. The yarn selection is great, for the record!

But back to the museum: the Knitting History section was small, but they managed to cover a lot. I could’ve simply stared at the items on display: 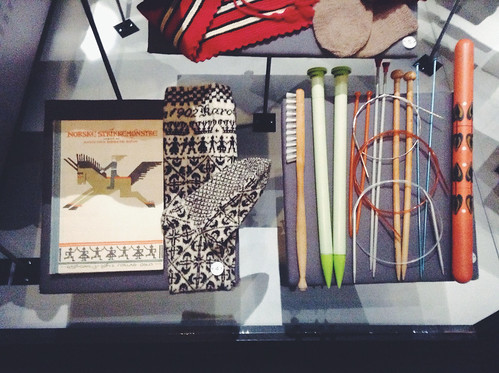 That’s an original copy of Annichen Sibbern Bøhn’s landmark Norske Strikkemønstre (Norwegian Knitting Designs, 1929) to the left. Annichen spent 1927 traveling around Norway collecting different designs and patterns, taking photographs of samples, and writing charts for the different designs. It’s a wonderful source of inspiration for anyone interested in Norwegian knitting and while the book was out of print for years, it’s been republished thanks to Terri Shea (author of Selbuvotter: Biography of a Knitting Tradition). You can take a peek here, and if you’re interested in learning more about Annichen, you can check out the PDF of an article Terri wrote for Piecework Magazine here (PDF link).

Moving to the right from Annichen’s book, there’s a stocking from Selbu, a mohair brush, and a collection of straight and circular needles in different sizes. And that painted needle case on the end! 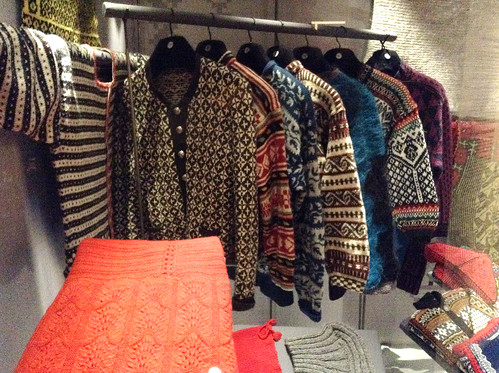 There was also a large selection of sweaters on display. Lurking up on the wall, in the top right-hand corner of the photo, there’s a Skappelgenser, the super simple sweater that took Norway by storm in 2012 (I’ve knit one myself). Many Norwegians who weren’t knitters learned to knit to make themselves a Skappelgenser.

There was also a case full of sweaters designed by Unn Søiland Dale, who designed many sweaters for the Sandnes factory. Her most famous and most recognizeable design (especially as it’s seeing a resurgence right now), is the iconic blue, red, and white Marius sweater. Many of her sweater designs became Norwegian icons and are still recognizeable today, like the Marius sweater. Check out this lady’s style: 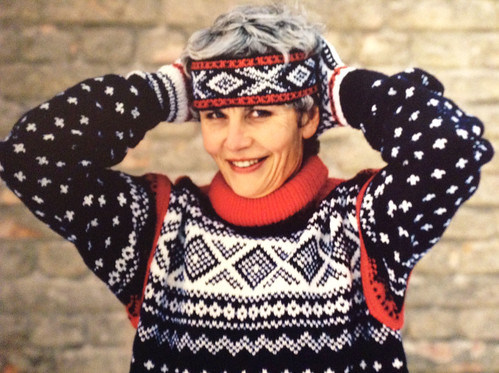 There was also a beautiful temporary exhibition on when I visited, featuring photography by Italian photographer Luca Berti. Luca cycles around Norway taking photos of people and the countryside, and the results are gorgeous. The photos were shot recently, but most are shot on film and many with large format cameras, so they feel quite nostalgic. That exhibition is up through September.

My souvenir from the museum gift shop was splurging on a book: 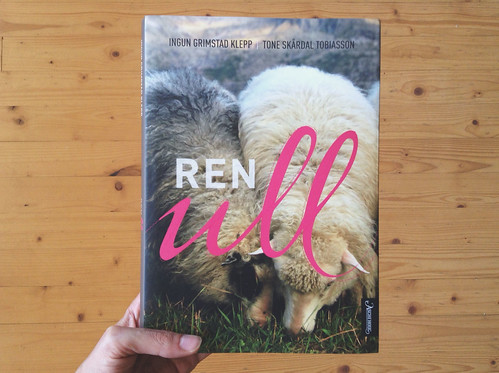 Ren Ull, or Pure Wool, by Tone Skårdal Tobiassen and Ingun Grimstad Klepp. It is exactly as it sounds: a book all about Norwegian wool. It’s a history, an account of wool in the lives of everyday Norwegians, and it tells the story of wool from sheep to product. Here’s an English translation of the description from the book jacket:

Wool is part of the Norwegian soul, a warming gold that is spun, knitted, woven, and transformed into wonderful products like our national costumes, sweaters and undergarments, upholstery and rugs. Everyone knows that the South Pole was reached because of Amundsen’s wool undergarments, and everyone knows that wool is tantamount to a happy childhood. With winter sport idols Vegard Ulvang and Kari Traa (who added a dose of sex appeal), wool  undergarments have undergone a renaissance.

In PURE WOOL we follow the path from sheep to product. Here you’ll find the story of quality, Norwegian industry, nostalgia and tradition, and modern design. Here also we discount several myths – for modern wool neither scratches nor shrinks. The starting point is Norwegian sheep, but in a globalized world, the wool takes some detours that few know or think about. So let yourself be surprised and seduced into a world that affects us all. [Translation mine.]

It was released in conjunction with The Campaign for Wool‘s Wool Week in 2013, Norway being one of several other countries that has taken up the campaign since it was started in the UK in 2010. I’m so pleased to know that the importance of wool is being given real recognition in a country like Norway where it has historically been so important. I’m not terribly far into the book yet (I’m a much slower reader in Norwegian than in English) but it’s chock full of color photos past and present, and the topics covered are certainly wide. I’m really enjoying it, and I’d definitely recommend it to any Norwegian speakers (as far as I know, there is no English translation). It is nice to be reading it as I prep for the Nordic Knitting Conference, and I have a feeling a lot of the subject matter may come up in my classes.

All in all, the Folkemuseum on Bydøy is absolutely worth a visit if you ever find yourself in Oslo. Give yourself at least a whole day – it’s the largest museum of cultural history in Norway, after all – and try to go when the weather’s decent so you can enjoy the open-air museum. It’s also a great spot to hit if you’re doing research on many aspects of Norwegian culture, and you can read about the collections and archives of the museum here.