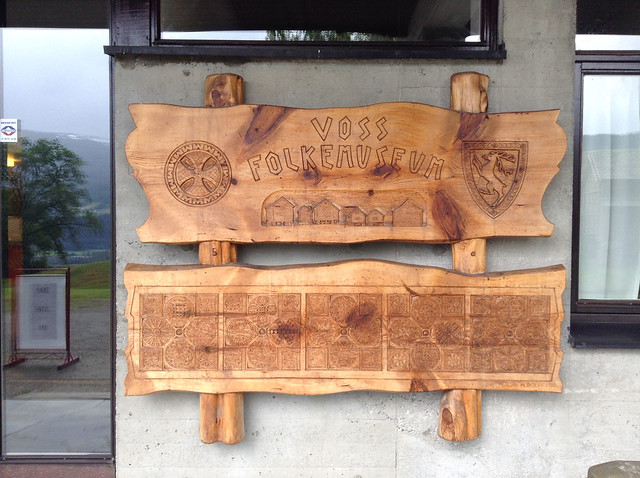 On my trip to Voss last weekend we had a chance to visit the Voss Folkemuseum. While my trips to museums with groups are always shorter than they would be when I’m on my own (I spent so many hours at the National Museum of Iceland a few months back, which I am now realizing I never actually blogged about), it was a great visit and I think the museum’s definitely worth seeing if you ever find yourself in Voss! The biggest reason for the trip to Voss in the first place was that our friend Marius, who’s from Voss (but lives in Oslo now), was back home housesitting for a few weeks. Marius has a cousin, Bjørnar, who’s a guide at the museum, so he gave us a little tour around, which was great. 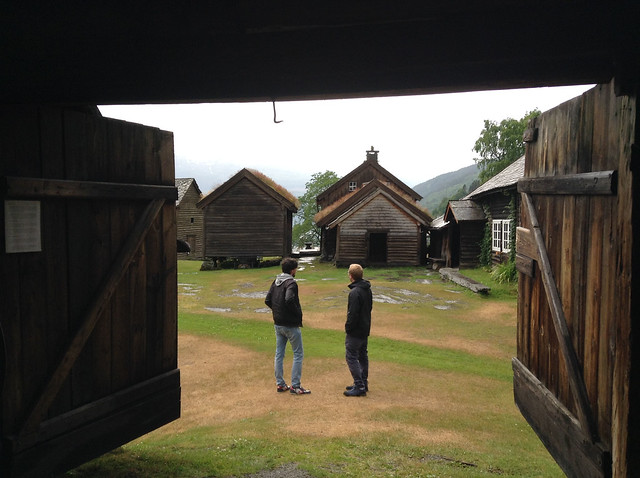 Marius & Bjørnar on the farmstead

One of the coolest things about the Voss Folkemuseum is that it started with the purchase of the Mølster farmstead in 1917 (Mølster remained a functioning farm until a few decades ago). The museum building housing artifacts and exhibits was built next to the old farmstead. The buildings of the farmstead exist exactly as they did when it was a functioning farm, i.e. they’re all in their original locations, sod roofs and slate roofs alike being maintained (Bjørnar explained that occasionally, the grass on top of the sod roofs has to be cut – in the old days, they’d just stick a goat up on the roof, but now the roofs are maintained by museum staff). The oldest building on the site dates from the 1500s, which is pretty remarkable. It’s a great way to see what a typical Norwegian farmstead would have looked like, both outside and in, up until the mid-20th century. It also sits up on a hill, overlooking Vossevangen. It’s a beautiful spot. 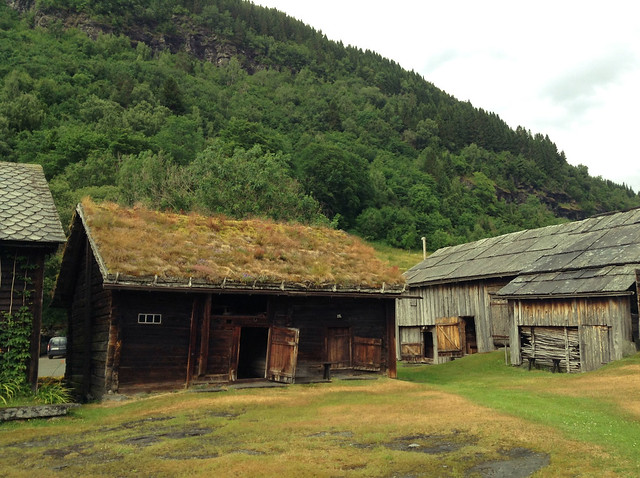 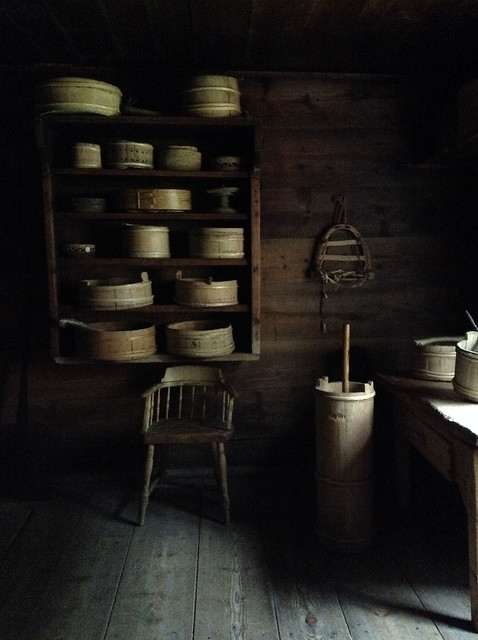 I really enjoyed the inside of the museum as well. Being a folk museum, there were several permanent exhibitions showcasing what daily life was like for the people of Voss in decades and centuries past. Items used both in day-to-day life as well as more festive and formal occasions were on display. Unsurprisingly, I was drawn both to the knitting and wool-related items, as well as the items related to the bunad, or national costume, of Voss (for those who don’t know, Norway has regional national folk costumes worn for celebrations like Constitution Day or weddings; Norwegians who can afford bunads traditionally receive them for their Confirmation). 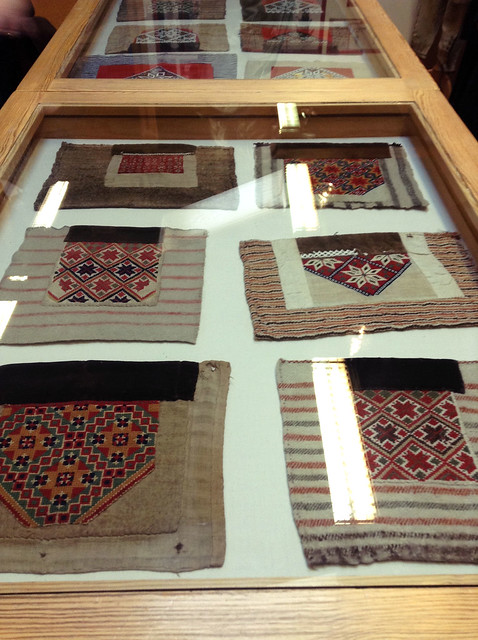 I believe these are bunad bibs (the part in the middle of the bodice as seen on the bunad below) but for some reason I didn’t note what this display actually said, so I could be wrong. In any case, there was a lot of beautiful embroidery and beading on display. 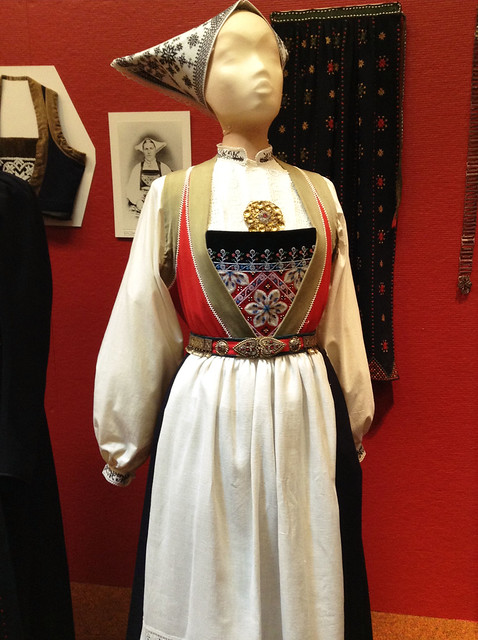 A bunad from Voss. Voss is the only place in Norway where I’ve seen the two-pointed skaut shown here (skaut is the word for headscarf). For all regional bunads, traditionally the type of head covering often corresponded to one’s age and martial status, and brides wore special bridal crowns and silver for their weddings. The page is in Norwegian, but you can see photos of different types of bunads from Voss here, and you can see the wedding crown from Voss here. It’s interesting how the bridal crown maintains the unique shape of the skaut.

On to the wool! 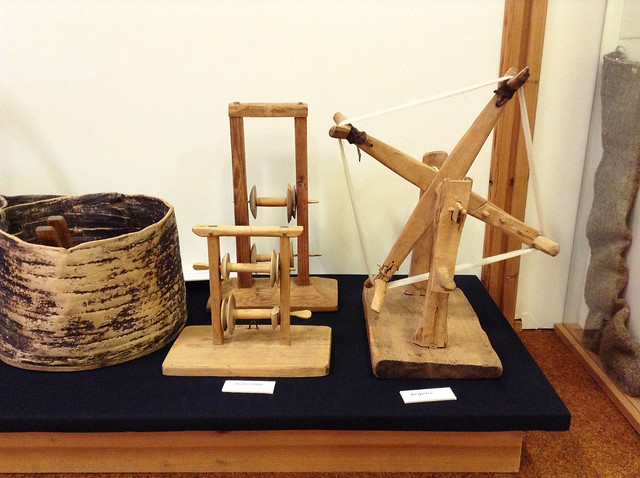 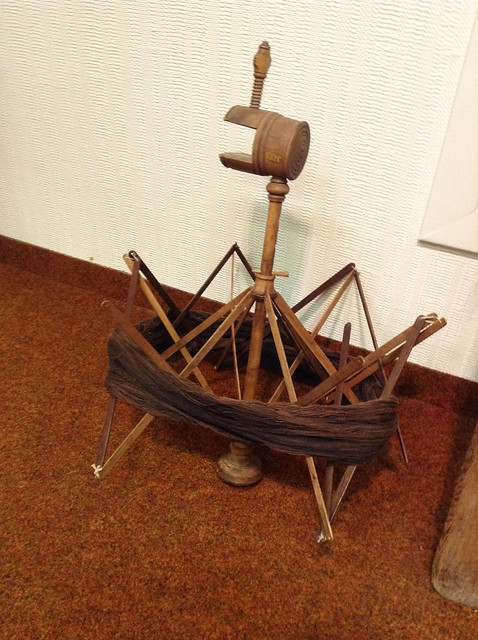 The thing I enjoyed most about seeing the old tools for working with wool (prepping, spinning, ball-winding, etc.) is how very little these things have changed. The modern-made tools we use are the same in so many respects. I got especially excited about the umbrella swift in the bottom photo, which dates from 1842. The mechanism for adjusting the height of the moveable part of the swift appears to be a slim piece of wood removed and inserted into different holes, so that it effectively acts as a stopper. I’m not going to lie – this probably works better than the common wooden screw stopper version I have (like this one), which has a tendency to not hold the swift in place after enough use (leading to much grumbling and/or swearing).

There were also some knitted items on display: 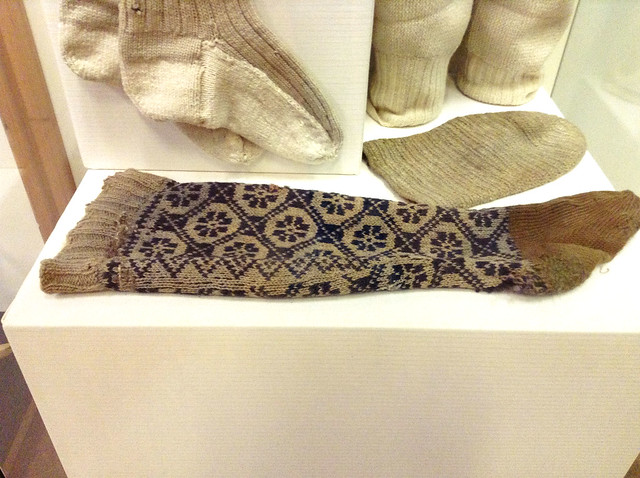 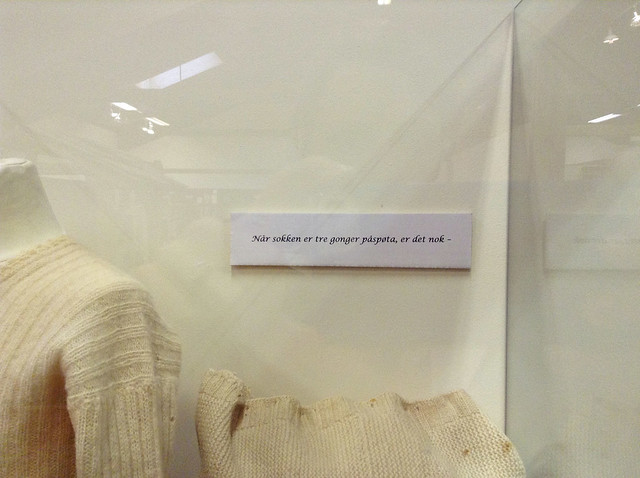 They were well-worn and there was definitely some visible mending going on. I was pleased to see the long cap next to the stocking in the top photo on display; it’s actually knitted, but was rather made using nålbinding (it was nålbinded? Nålbound? Needle-bound? I’m at a past participle loss!). The sign in the bottom photo reads “Når sokken er tre gonger påspøta, er det nok -“. I’m utterly and completely unfamiliar with the word “påspøta” but I can only guess it has something to do with mending (the regular bokmål word for mending is bøte, which bears some resemblance to spøta, I guess). If that’s the case, this would mean something like “When the sock has been thrice mended, that is enough.” Fair enough! Of course, in Norway, once woollen goods reached the point beyond reasonable repair, they were often torn up and shoved into corners of walls and windows needing extra insulation, and then later, they’d be sent to the shoddy mills to be recycled into new woollen goods.

My other favorite thing in the permanent collection may have been the fiddles. 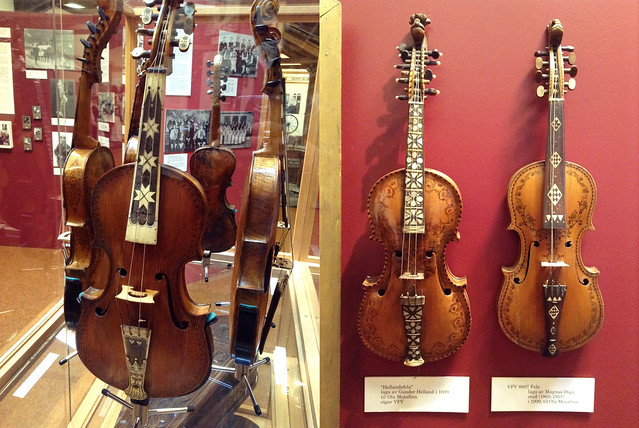 In Norway, there are hardingfeler and flatfeler (“Hardanger fiddles” and “flat fiddles,” respectively). Flat fiddles are more like a typical violin, but the Hardanger fiddles are a bit more special. Sound-wise, the biggest distinguishing characteristic is that they have a second set of strings, set below the main set, which are called understrings. The understrings aren’t played, but rather, they resonate when the main strings are played. I first saw a Hardanger fiddle up close and heard one played back in North Carolina when I was in college, and I remember thinking that the decoration was beautiful but perhaps a bit strange. I’ve really come to love them, though, having seen many more examples over the years of the lavish decoration that is typical of these fiddles. Patterns of black ink rosing on the body, inlay (usually mother of pearl, but sometimes bone) along the tailpiece and fingerboard, and an ornamental carving such as a dragon’s head above the pegbox are all typical decorations. I especially liked the more simple one pictured at left, because of the eight-pointed star motif.

There was also a temporary exhibit on display of photography by Christian Herheim, who was described to me as “Voss’s first photographer.” There were some pretty spectacular photos, both of daily life in Voss in the first half of the 20th century, as well as posed portraits for formal occasions. I was drawn to this photo below, of the Lirhus children (all eleven of them): 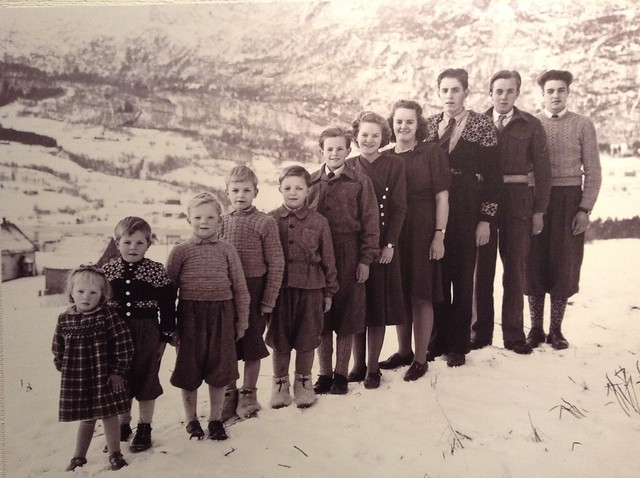 Admittedly, the knitwear they’re sporting is part of what drew me in. There was also this photo of a bride, who’s an ancestor of both Bjørnar and Marius (I think Bjørnar said she was his grandmother). You can see what the back of the bridal crown looks like in this photo: 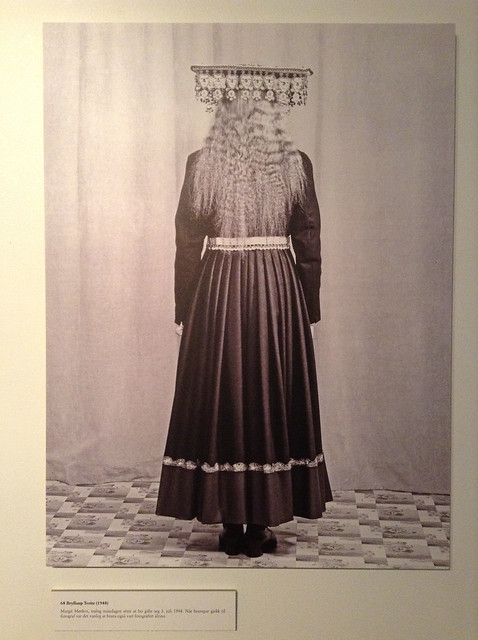 We stopped by the gift shop on the way out where I picked up a bilingual book on popular bunads. It’s been fun to thumb through it and read a bit about some of the different bunads I haven’t seen before. All in all, a very worthwhile visit. Tusen takk, Voss! 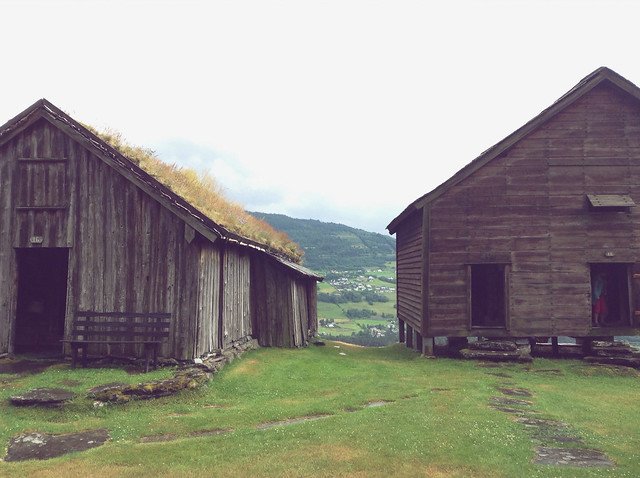