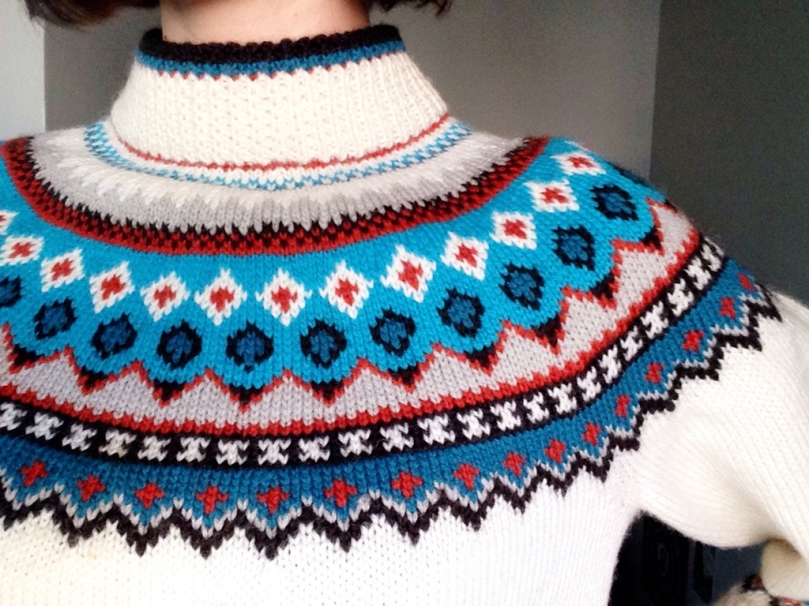 Perhaps the posts about vintage yokes from Kate or Ella finally got to me, or perhaps it was just the siren song of the bright, bright teal, but I found myself impulse-buying this beautiful Norwegian yoke last weekend when I spotted it on the sidewalk rack of a local vintage shop. 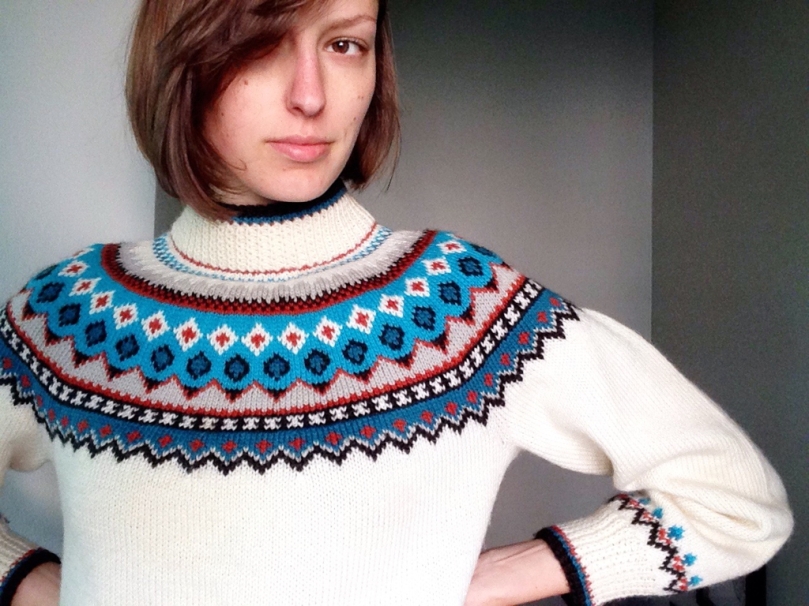 While the fit is a bit… let’s say dated, and the sleeves are short (they’re always short on me if I haven’t made it myself), I really don’t mind since the yoke is so striking and it’ll be warm in the winter nonetheless. It’s knit by hand, bearing the label “Maurtua,” which was actually a handicrafts shop in Oslo that catered almost exclusively to tourists (which is probably how it made its way from Norway to Seattle). The address, Fridtjof Nansens Plass 9, is located in the semicircular plaza surrounding Oslo’s city hall, and that storefront is actually still a souvenir shop today (though the current shop goes by the far more generic name of “Norway Shop”). 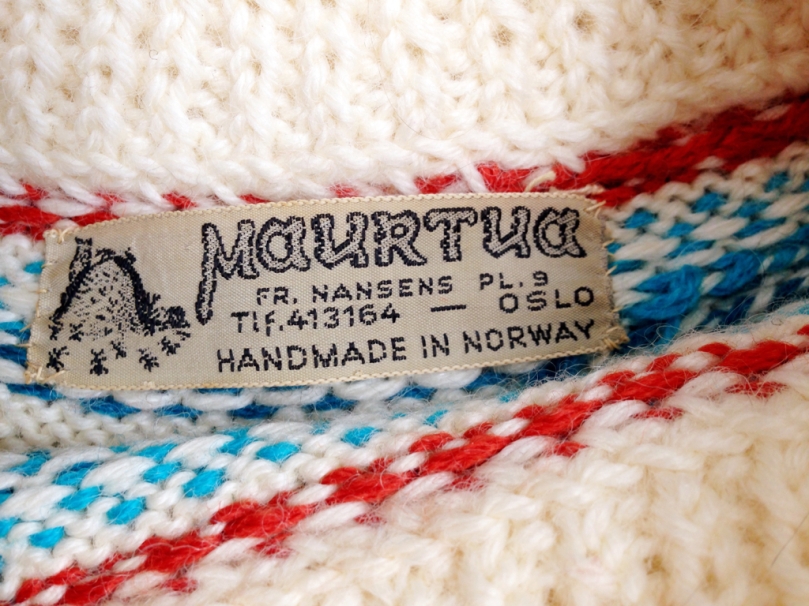 At any rate, I got curious about the pattern, which bears a notable resemblance to Unn Søiland Dale’s famous “Eskimo” sweater. Those of you who have read Kate Davie’s Yokes will recognize it from the chapter, “Greenlanders and Norwegians.” If you don’t have the book, Kate talks a bit about the sweater about halfway through this blog post. 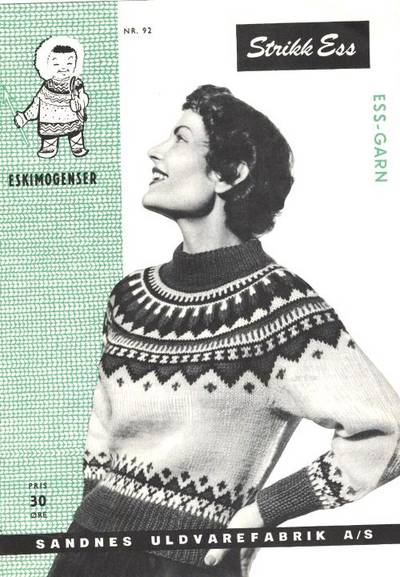 In any case, here’s what I’ve managed to dig up looking for information about my own vintage yoke. It’s almost a perfect match with one of the Husfliden pattens, number 419: 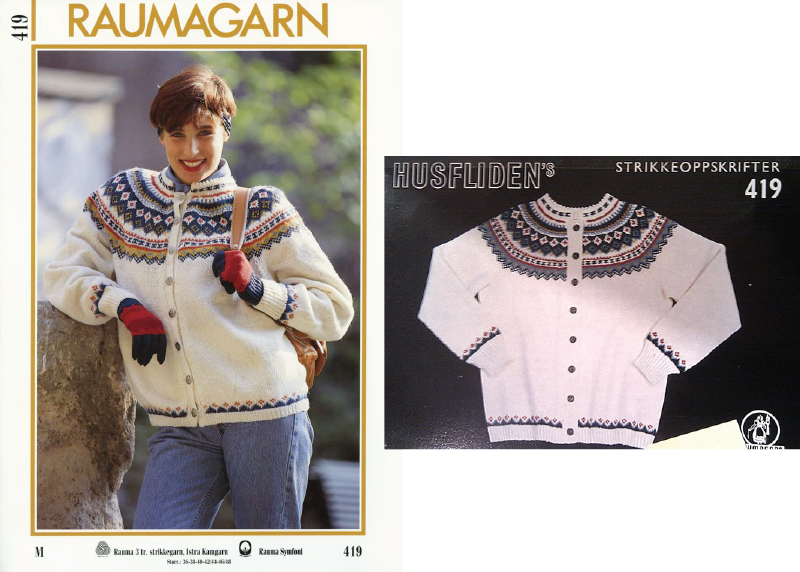 (The image on the left is from Raumagarn, the older one on the right was found via this Pinterest user)

A quick Google image search for “Martua Husflid” shows that Maurtua definitely made use of Husfliden 419, different iterations of which can be spotted on the image search page. While it’s possible a pullover version of the pattern existed too, my best guess is that the knitter who made this sweater decided to make use of artistic license and modify the pattern. I must say I’m in favor of the design choices – the design looks great as a pullover rather than a cardigan, and the use of two different teal-blues gives the yoke a lovely depth that Norwegian knitting doesn’t always achieve with its typically limited color palette (the same goes for the combination of light grey in addition to the main off-white color). The red is a sort of rusty brick red, less saturated than a candy apple red would be, which helps balance the yoke and keep the bright design from being too overwhelming. There are some chart differences as well, where the knitter appears to have embellished or modified existing motifs. The stripes at the ends of the ribbing at neck, cuffs, and hem are a nice touch. I love too how the stranded motif at the sleeve cuff echoes the motifs in the yoke without actually replicating them. 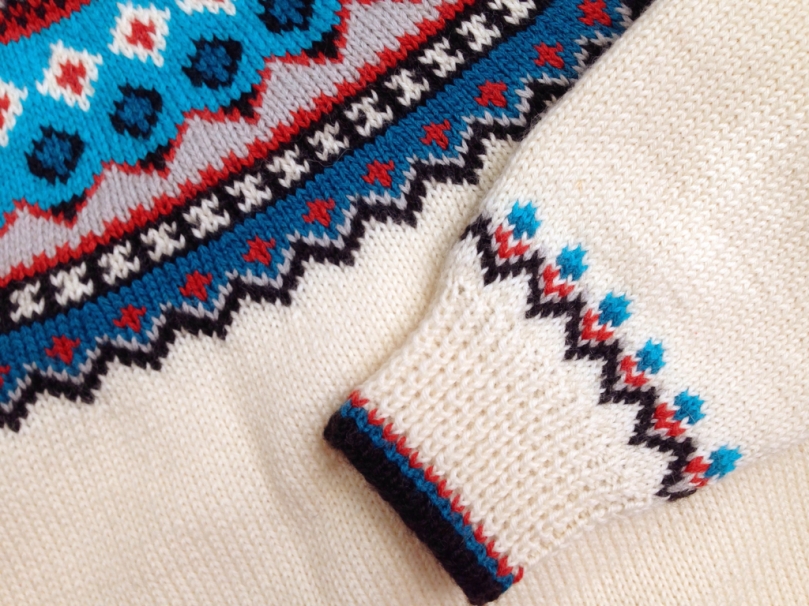 I’m quite pleased with my new pullover – I love digging into the history and trying to track down the origins of a piece of knitting. Do you have any vintage favorites or hand-me-downs that bring you inspiration?

P.S. A very hearty thank you to all of your kind words about my Norway/grad school news. I am so excited to make this leap and your support and encouragement means the world to me. I’ve had a lot of people express hopes that I’ll be writing about my adventure, and I’m absolutely planning to do that! Something to look forward to. 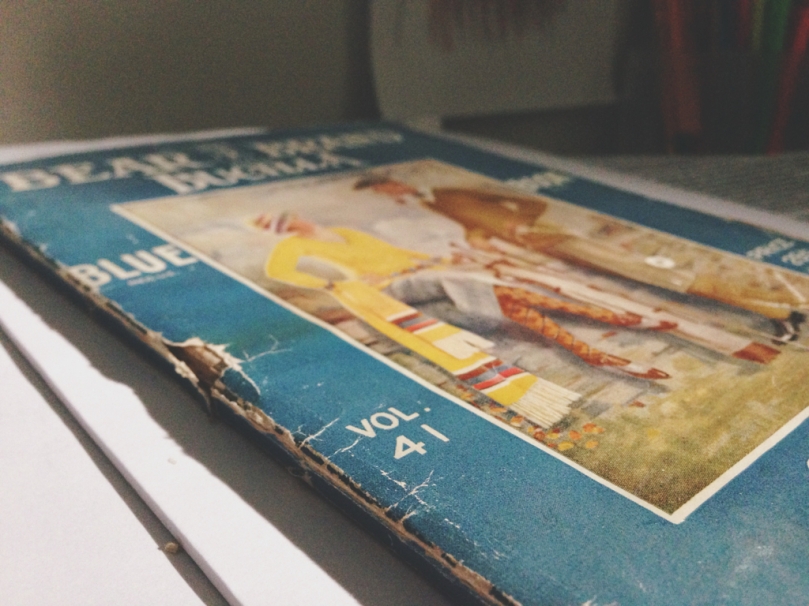 I enjoyed Karen’s post that went up today over at Fringe about the vintage sweater booklets sent to her by a friend. I had to smile to myself, because yesterday I’d pulled out what is probably my oldest piece of knitting paraphernalia – and I was largely inspired to do that because of the waistcoat Karen’s currently knitting from a vintage pattern.

The booklet I pulled out to look at again was published Bear Brand & Bucilla in 1922 – it belonged to my great grandmother, who taught my mother to knit, and was passed down to me by my mother, who thought I’d enjoy it (and she was right). Like the Jack Frost booklets Karen wrote about, the booklet’s near falling apart (in fact, the cover is completely detached) and there’s ancient yellowed tape holding together pages that were torn long ago. 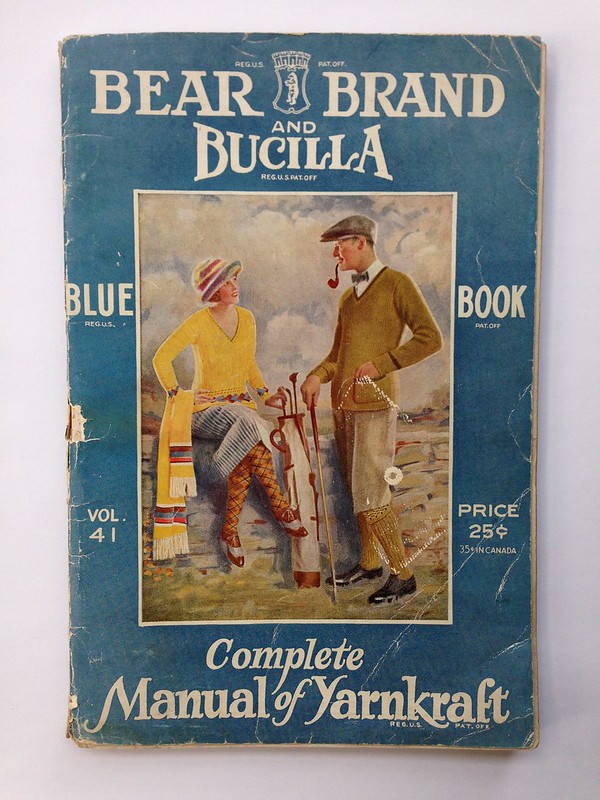 I don’t know much about Bear Brand or Bucilla yarns, but apparently they were both under the umbrella of the Bernhard Ulmann Co. As you can see, my booklet is volume 41. I love that this was early enough they were spelling it “yarnkraft” (cursory Google searches seem to indicate that this later became “yarncraft,” as we would now expect).

I also love how very twenties this whole booklet is. There’s a heavy focus on sportswear, with scenes of golf, skiing, and bathing at the beach worked in, but I think a lot of the pieces included are absolutely wearable today. Designs for women, men, and children are included (and there’s even a dog sweater), in both knit and crochet. Here’s a sampling: 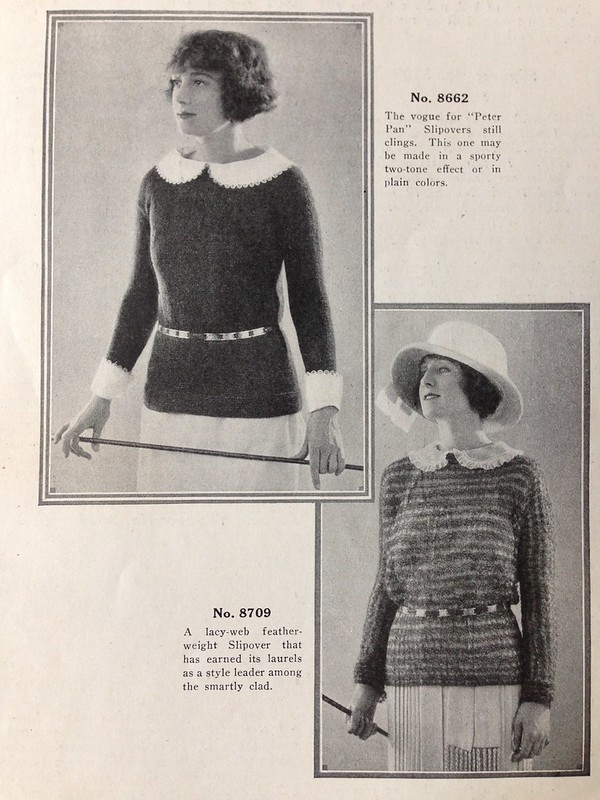 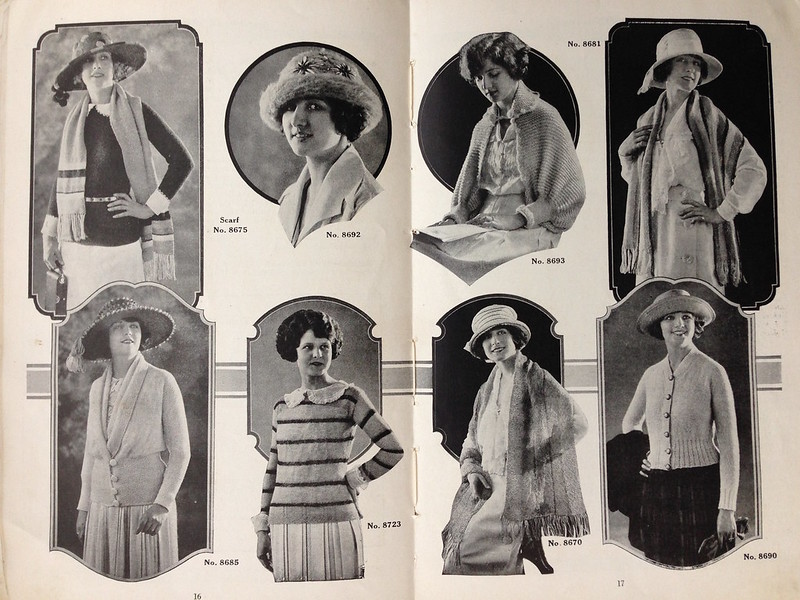 How contemporary is that beautiful striped pullover? I adore it. 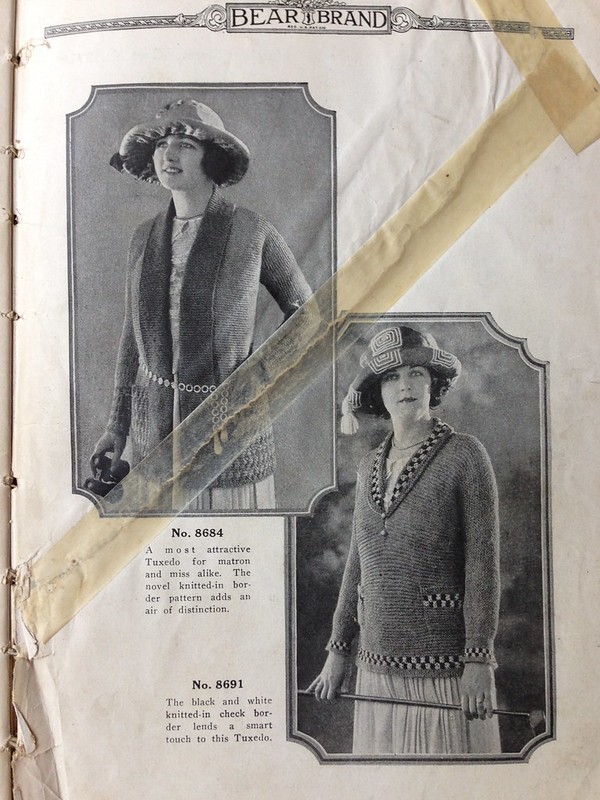 Knitters of the twenties would appreciate my current obsession with garter stitch, I think.

But perhaps my favorite piece in the whole booklet is: 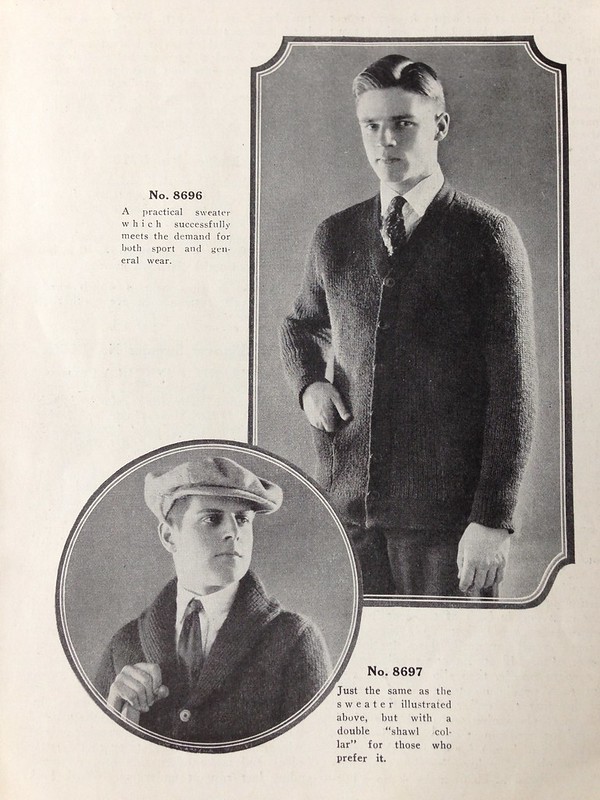 “A practical sweater which successfully meets the demand for both sport and general wear,” with optional shawl collar version. Practical indeed. 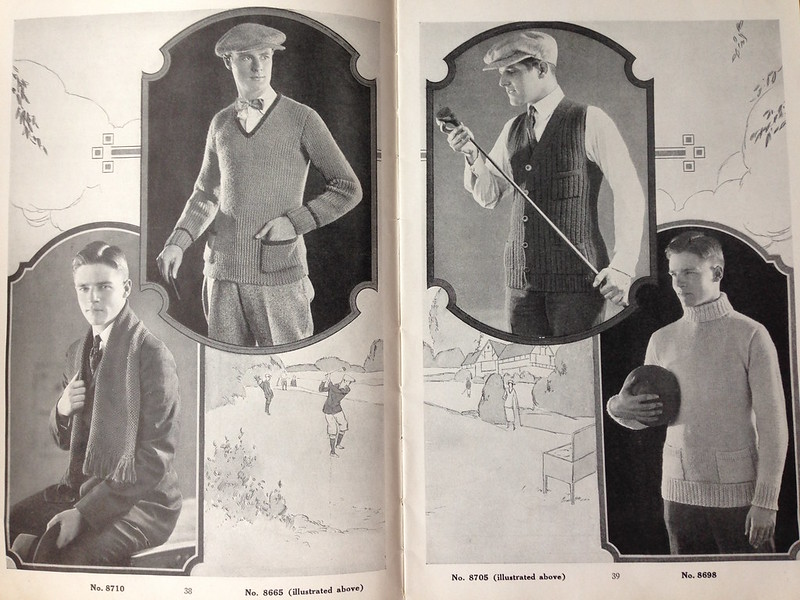 I’ve never actually knit from a vintage pattern but I’d love to someday, regardless of the challenges they present for the modern knitter (how to substitute yarns, how to make sense of terminology and abbreviations that may have changed over the decades, how to achieve the right size, etc.). I’m definitely looking forward to seeing Karen’s finished waistcoat, and I’d love to see any projects you all might have knit or crocheted using vintage patterns.

I learned to knit from my mother, who in turn learned from her grandmother, and so on, and so forth. While I’ve always really admired those knitters who learned to knit not because of any family history but simply because they were interested in it, I must admit that having a family connection to the craft has always made it special for me. I learned as a kid, but I didn’t really get into knitting, branching out and learning new techniques, until I left for college. I certainly enjoyed it (and obviously still do!), but I think on some level it was also really nice to have something to connect me to my mother and my roots when I was away from home. It was something we could bond over whenever I came back to visit, too.

In the age of Ravelry my mom’s started knitting again in earnest, especially as she’s moved towards retirement and had more time for it. She’s branching out and learning new techniques, or in some cases, re-learning old techniques, too. But mom knit a lot when she was younger. She knit a lot in an age where knitting patterns could be pretty… interesting. I mean, let’s be real. Knitting and crocheting got kind of weird in the 1960’s and 70’s with the introduction of synthetic fibers on a grand scale. And while digging old stuff out of her closet, mom came across this particularly wonderful specimen of a sweater she made in the 70’s and she sent it my way. 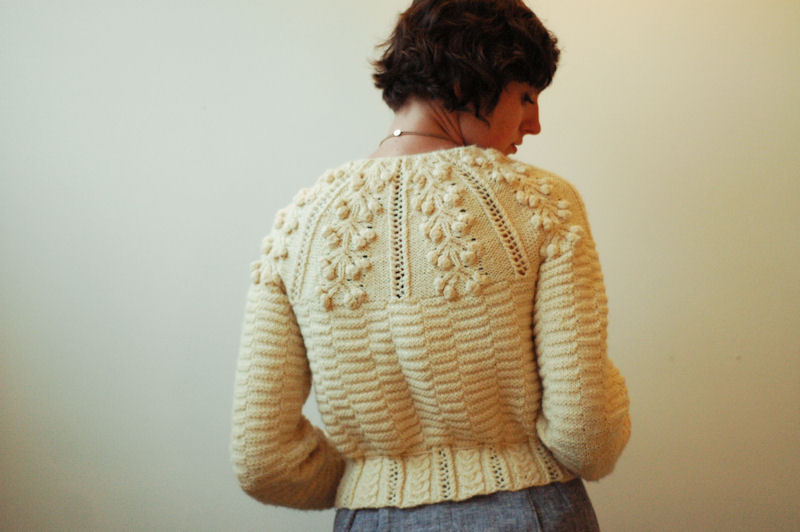 At first glance, there’s a lot going on. A yoke festooned with bobbles and lace, a knit-purl textured pattern on the body and sleeves, ribbing of cables and lace at the cuffs and hem, and a crocheted chain drawstring at the waist. And then you see the other side… 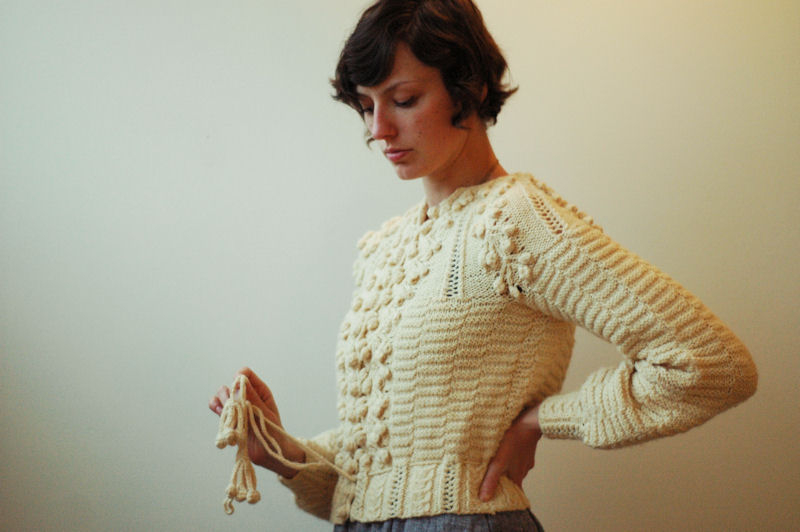 …where the bobbles continue down the front of the sweater. And the drawstring ends in tassels! With bobbles! Bobbled tassels! My, but there is a lot going on in this sweater. But there’ another surprise to reveal: 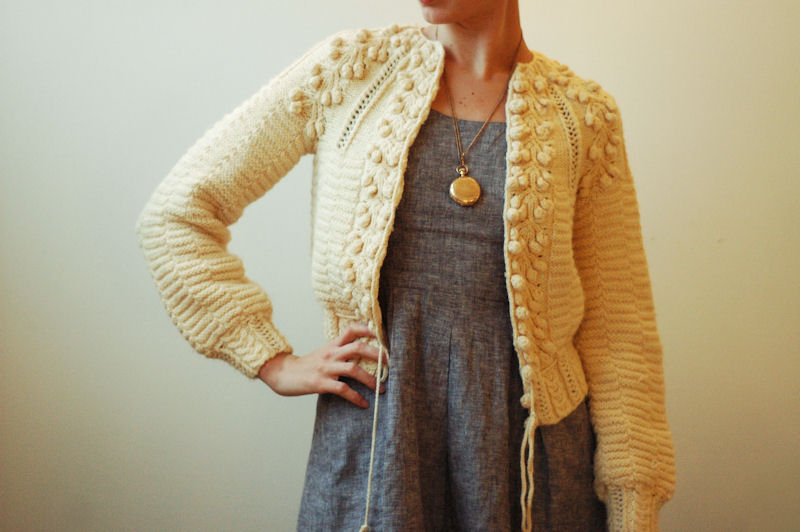 This sweater is a cardigan, and the center column of bobbles serves as buttons (with a crocheted chain running down the opposite side, to loop over the buttons. I have to admit the bobbles don’t make particularly functional buttons, as the loops have a tendency to pull right off of them, but it’s still a pretty genius idea. Mom sent a photo of herself wearing the sweater on a trip to Romania that I’d love to share, but I haven’t had a chance to scan it yet.

It’s easy for me to see this being a pretty fashionable little piece when my mom first knit it. I have to say, though, that while I don’t think I could pull it off in my own everyday wardrobe, I’ve seen echoes  of similar design features in much more current pieces. I wouldn’t be shocked to see it on a contemporary runway or on the racks at Anthropologie. The first thing this sweater reminded me of was James Coviello’s Snow Drop Jacket, pictured below left. That design’s from 2008 and was published as a knitting pattern in Vogue Knitting as well as a finished piece at Anthropologie under the name Aestival Gust Cardi. 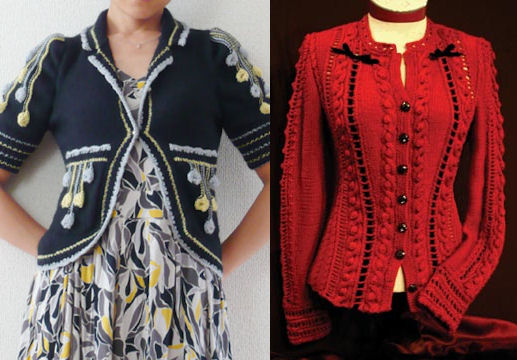 I was also reminded of the sweater at right, Ruby, by Joan McGowan-Michael. It’s a veritable bobble party, with lace and ribbon to boot. I believe Ruby was also published in 2008. They are all three very unique and in some ways very different pieces, but they all share a certain loudness and attitude I can’t help but admire.

I love scoping out knits at vintage stores, because I never know what I’ll find. My favorite vintage store nearby is Trove, in Ballard, and they’ve often got a diverse offering of knits on hand. Some are machine knits, and some are old hand knits, but I love them both. I love taking a closer look to figure out how things were constructed, what they were made of. Often I can ask the owners where they got them from – an estate sale, a thrift store, somewhere else? I’ve long been entranced by this bird sweater, because the entire colorwork pattern is duplicate-stitched over the sweater itself. Did the sweater come that way? Did some crafty lady think her white sweater was boring and decide to embroider a bird on it? Who knows! I’ve also picked up a Dale of Norway sweater that someone had obviously accidentally felted, and I just got a crazy colorwork cardigan made by the Jersild Sweater Company of Neenah, Wisconsin. Some internet searching revealed that Jersild was absorbed by this company and they’re still making sweaters today.

In the meantime, while I may not wear it, I’m hanging on to mom’s sweater for now. It tells a great story, and for me, that’s enough. (Additionally, a very happy birthday to my mother today!)