I’m back in Seattle after a few weeks of travel over the holidays, and it feels quite good to be back in the office and working again. I had a lot of fun on my travels, though. Here are a few things I’ve been up to:

I spent the new year in Oslo, which was really lovely despite the lack of snow. In addition to seeing some dear friends, my partner and I did a little bit of coffee tourism, because there’s a pretty unique thing happening in the Oslo coffee scene right now. I have to say I’m a fan (you can read about it here – thanks to my friend Kamni for the link). The coffee in the photo above is Finca Tamana at the Tim Wendelboe spot in Grünerløkka (extracted via the Aeropress, which was totally different than an espresso preparation – Aeropress is the way to go, for this one).

I went to London, where it was mostly rainy (but there was some beautiful sunshine as well). I had a chance to meet up with Meghan and Lydia from Pom Pom Quarterly which was a treat, and I hope I’ll get to see them both again sometime. I’m already looking forward to the spring issue coming out. And I really loved London. I want to go back already, because there’s so much to see! I feel like I barely scratched the surface.

A few other updates:

Apparently working on a collection of knitting patterns isn’t enough yarn in my life, because I’ve been spinning with my spindle on my days off! I finished my second skein of handspun this week and I think I’ve made good progress from the first. I give you Minty Blue Faced Leicester:

It’s a wee skein, about 44g and approximately 35 yards, but I love it. I also tried my hand at dyeing for the first time, and I’m thrilled with the result. I used food coloring to kettle dye it on the stove top, and I love the minty color I wound up with. Here’s a peek at each step of the process, from the single (which I divided into two parts to ply), to the plied yarn, to dyeing, and finally the finished yarn: 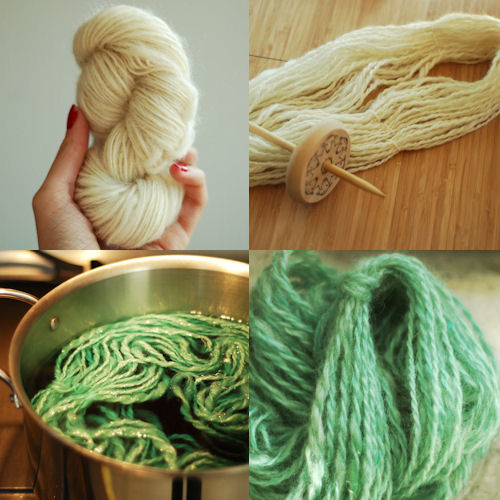 I haven’t measured wraps per inch yet, but it’s definitely finer than my first skein of yarn was. It looks so lovely and fuzzy in the skein, though, I almost don’t want to knit it up! Here’s a look at the thickness, with a dime for scale (this also gives you a sense of how tiny the skein is):

I’m excited to keep spinning with my drop spindle, because I feel like I’ll continue to get better with practice. There’s also something really incredible about working on a craft that is as ancient as spindle-spinning. I picked up some nice Shetland wool a few weeks ago and I started spinning that, so we’ll see how it goes!

(P.S. For those who are wondering how that first skein of handspun knit up, you can check out my ravelry page for the chunkiest wristlets. They’re pretty hilarious and ridiculous and would probably fit right in on the set of Game of Thrones.)

I’m home from Japan and when I have the time, I have many things to share from the incredible trip! Meanwhile, it’s crunch time for me in getting the Paper Tiger Fall/Winter 2013 collection patterns finished and prepped for publication, and the samples ready for a photoshoot! It’s all very exciting but it’s also a lot of work. And so, for now, just a quick update on a few things:

My bike sweater, Faire du Vélo, is currently hibernating at about this point. I won’t have time to work on it more until after the F/W collection is released, but I thought I’d share the progress. I think you can get a sense of what the final sweater is going to feel now. I’ve just got to finish the raglan decreases, knit the collar, and sew a zipper in the front. I’m so pleased with the overall feeling of it, and I’m very happy with how the stripe sequence turned out. It’s sporty and bold in exactly the way I wanted it to be but also very wearable. I’ll be sure to post when it’s finished! I can’t wait to wear it when I’m biking.

Next, may I present The Chunkiest Handspun:

I’ve learned to use a drop spindle and I spun my very first yarn! It’s a 2-ply, and really ridiculously chunky with a thick-and-thin thing going on, but I wanted to ply my singles to practice. The two fibers I used were both from the Louet kit that Craftsy sells, a Jacob Grey Wool Top and a Medium Coopworth from New Zealand. There was literally just enough yarn for me to crank two little squares out of, which I will be seaming to turn into the Chunkiest Wristlets ever. I’d rather make use of my first yarn than never use it at all! It’s been very instructive. I’ll share photos of the fingerless gloves after I’ve seamed them!