I know I’m not the only one wondering where the month has gone. (This year especially, that seems to keep happening.) September has been the wettest month in Trondheim so far – I think it’s rained nearly every day. Just weeks and weeks of rain. Yesterday we finally had a clear day for the first time in ages, and it was a real treat! But I did manage to grab a few snaps in the past few days when there were breaks in the rain. I thought I’d share a few with you today, in case you needed a dose of autumn beauty.

Although I didn’t feel quite ready for it when the first signs of fall started showing themselves, I’m definitely enjoying it now. It’s hard not to love this season in Norway, even when the rain clouds won’t leave you alone.

Yesterday’s clear skies gave us one more treat – I finally saw some proper northern lights in Trondheim! We were absolutely spoiled when we lived in Tromsø, since they happen quite regularly there. In Trondheim they’re less frequent, and there’s quite a bit of light pollution both from the city, as well as the farming region on the north side of the fjord which has a lot of greenhouses that cast a noticeable orange glow into the sky. But last night, there were a few minutes of pretty active aurora and we were lucky enough to watch from our balcony. I’ve really missed the aurora, so I hope we get to see some more this year. 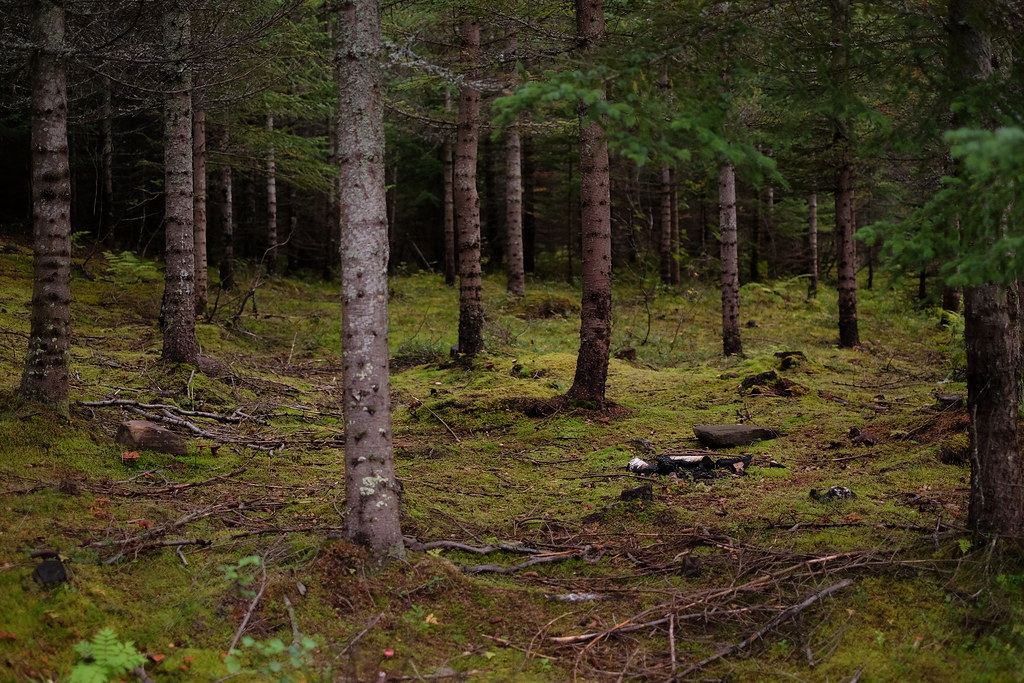 Yesterday evening the weather was good and I got to take a nice long walk around Tromsøya (I hope you all enjoy these posts about my walks around Tromsø, because they’re often the highlights of my weeks). I know many of you are trying your best to hang on to what’s left of summer, but here in the Arctic, fall is truly beginning (and I have to admit I’m quite happy about it). Autumn is a special time in Tromsø. The transitional seasons are short here (snow in September is not unheard of), but somehow that makes the way they mark the passage of time even more special to me. Ephemeral joys, and all that. 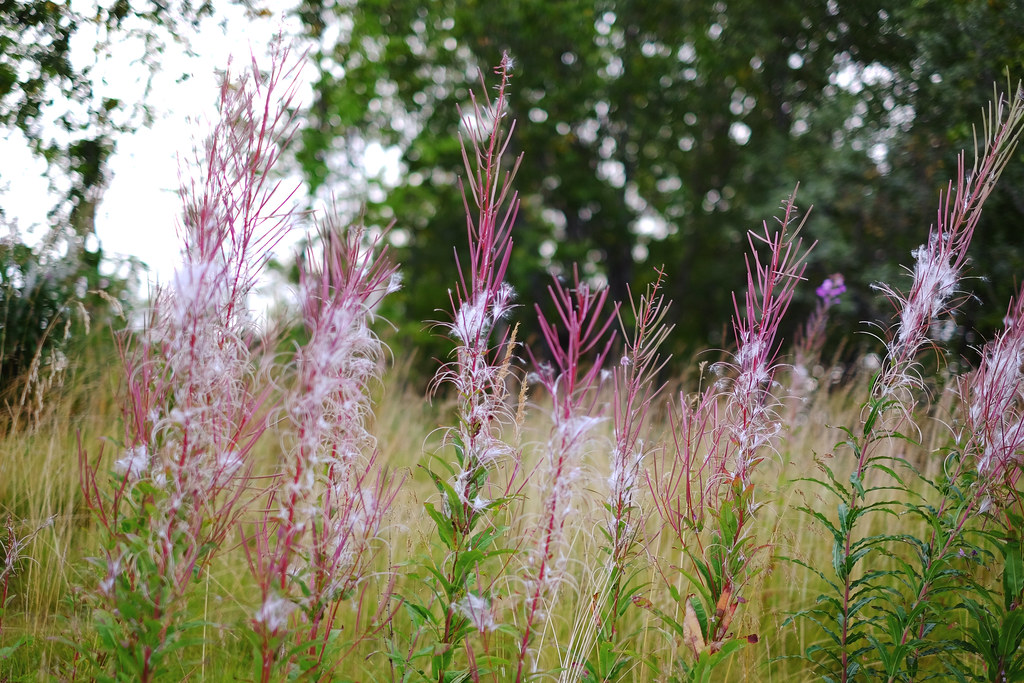 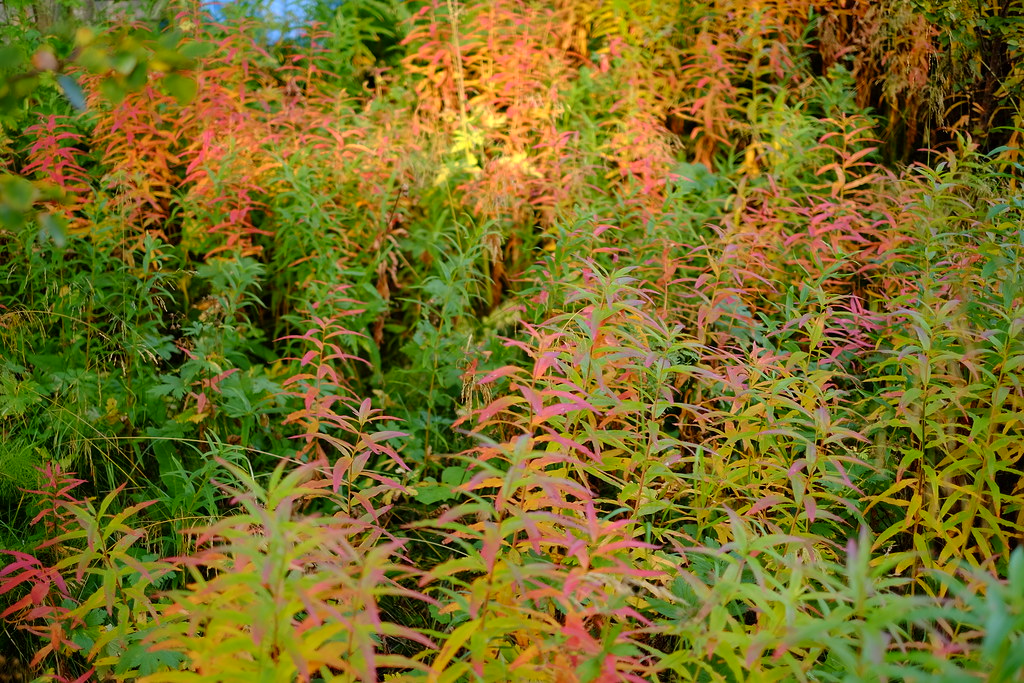 I love the life cycle of the fireweed. Five weeks ago it was in full bloom, and while there are a few stubborn blossoms still clinging to their stems, now most of the plants have lost their flowers and opened up their seed capsules (I love the silky hairs of the seeds). And in fall, the green leaves turn a vibrant red-orange. Many of the fireweed plants have turned already. 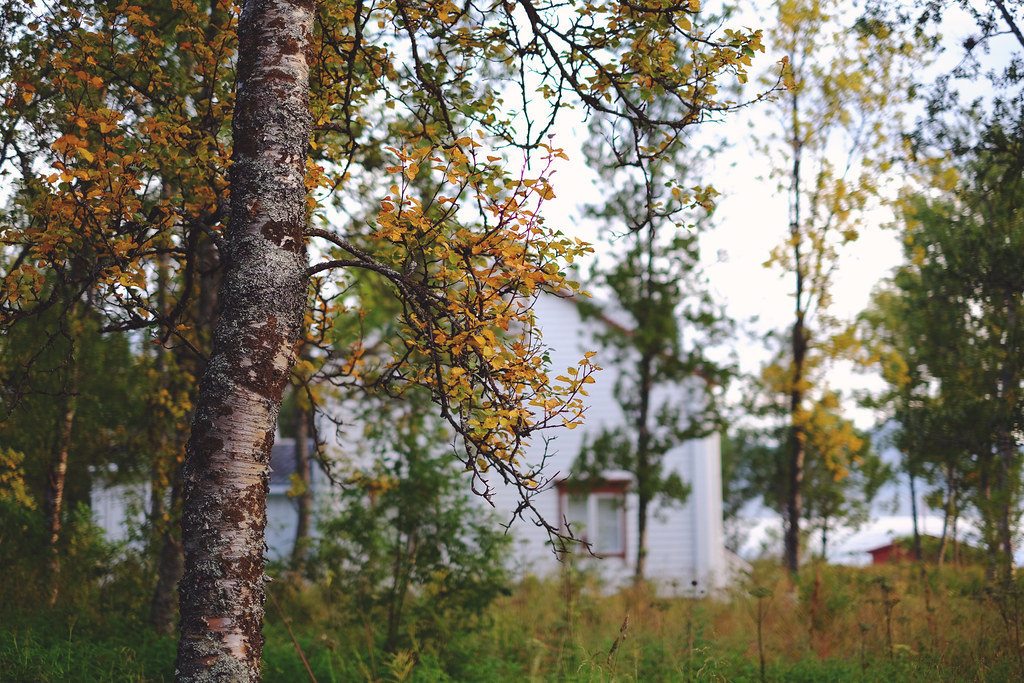 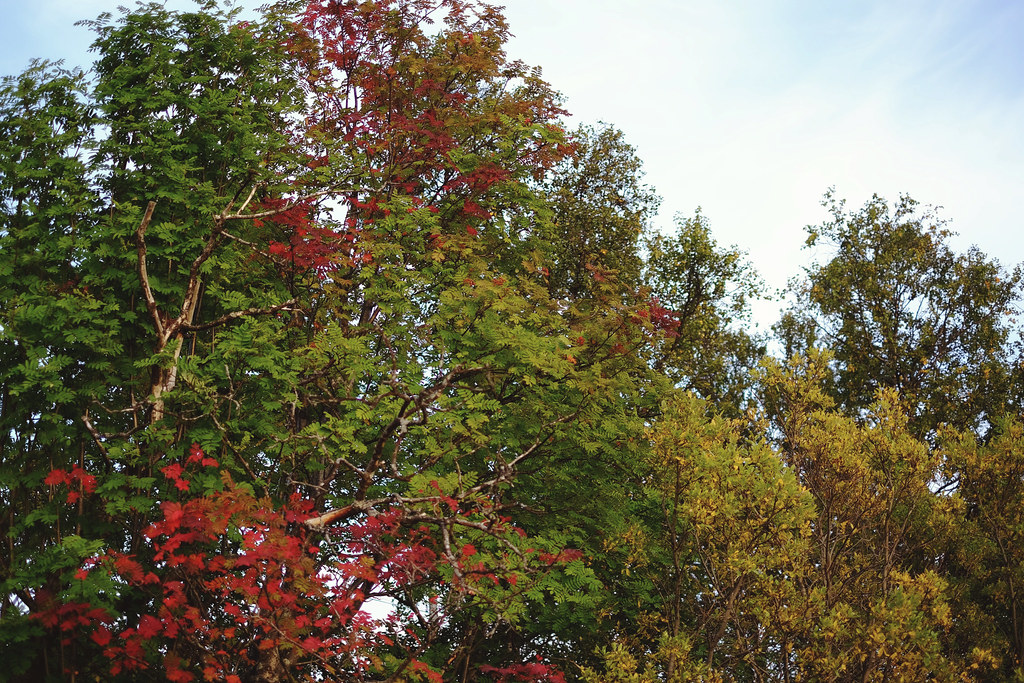 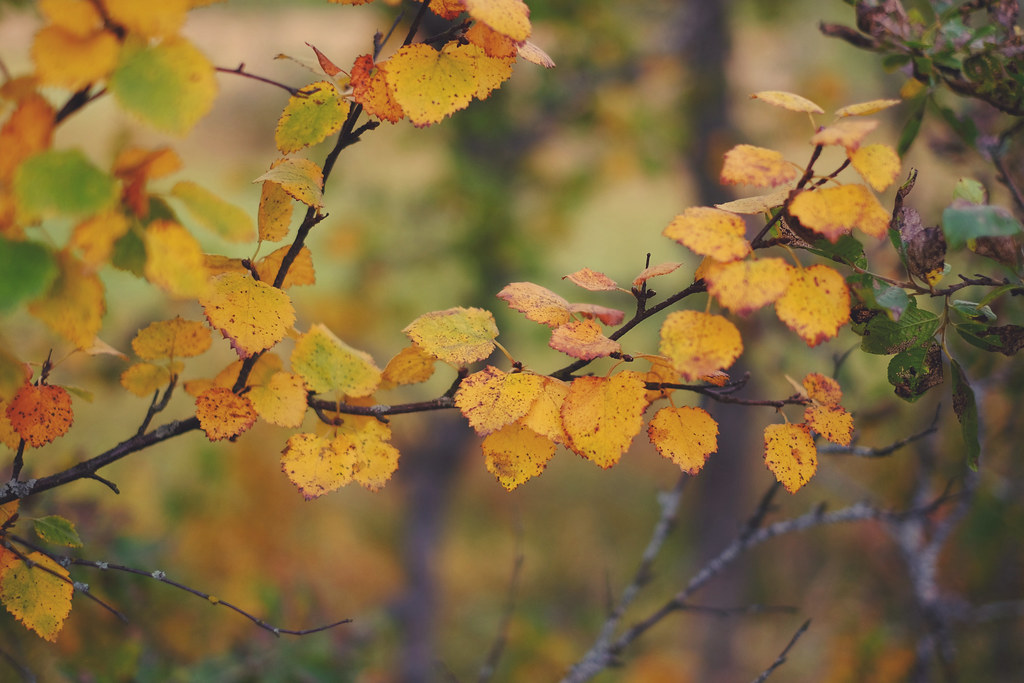 The leaves on the birches and the rowans have started changing, too. There’s still a lot of green – in some places the change is overall and subtle, and in others great tufts of leaves have changed at once. In a few weeks everything will be golden and red. 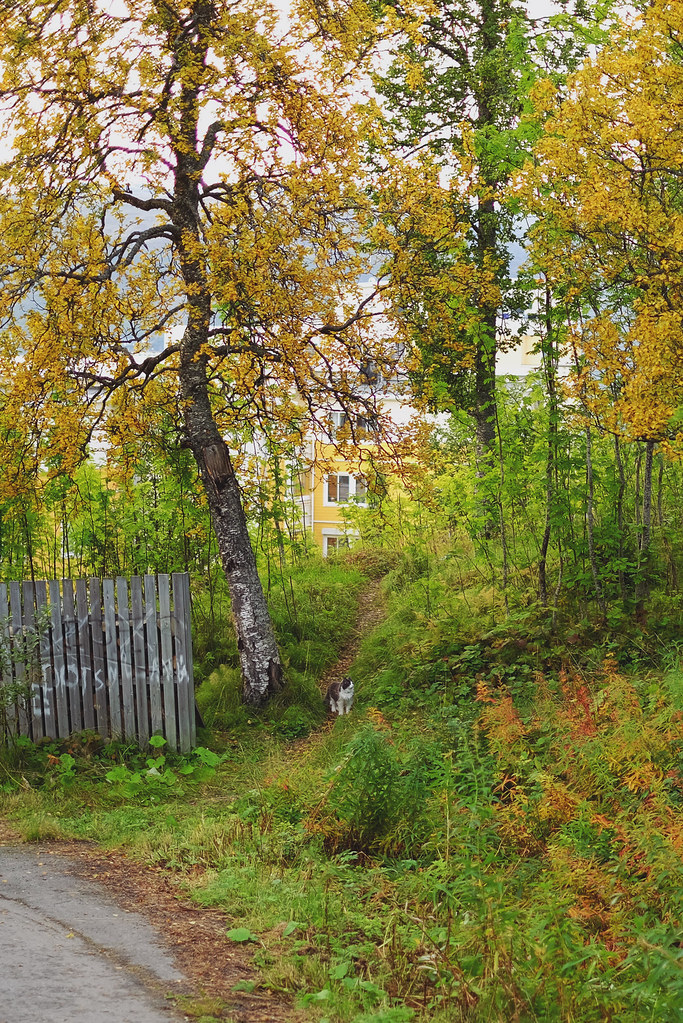 Autumn means a return to the most beautiful light. During the midnight sun, the light can be very mundane – the most beautiful time of day to see the sky is the middle of the night, when the sun is low in the sky (and if it’s overcast, the sky is just the same all the time). There are no sunsets. I’m so, so excited to have proper sunsets again, because the sky here is so incredible. 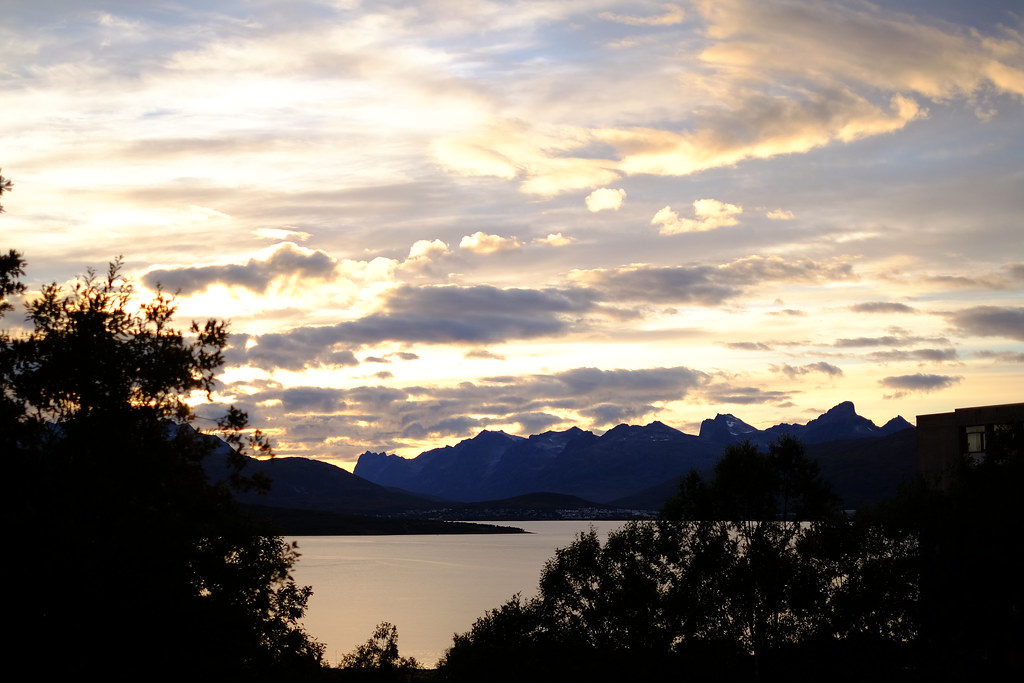 And of course, with sunsets comes a dark night sky again – the return of stars, and the return of one of my favorite things, the northern lights. The sky was clear enough on Friday to see them, even if they weren’t very strong. 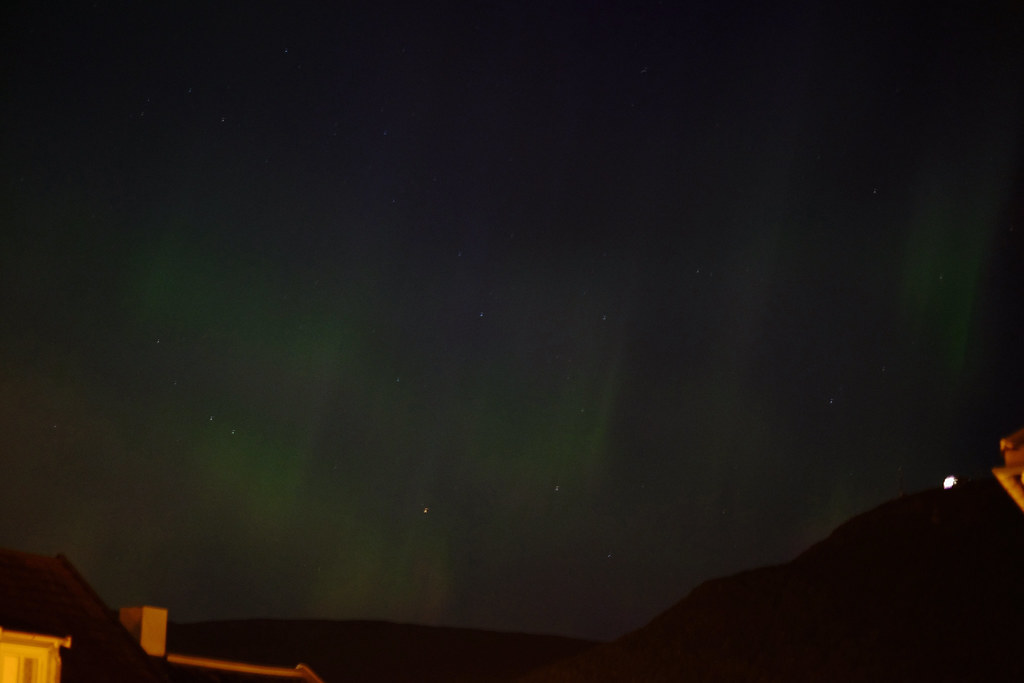 So I’m quite content to welcome autumn with open arms. Bring on the changing leaves, the northern lights, and the stars. I’ll keep walking with my camera, the closest thing to bringing you along with me. 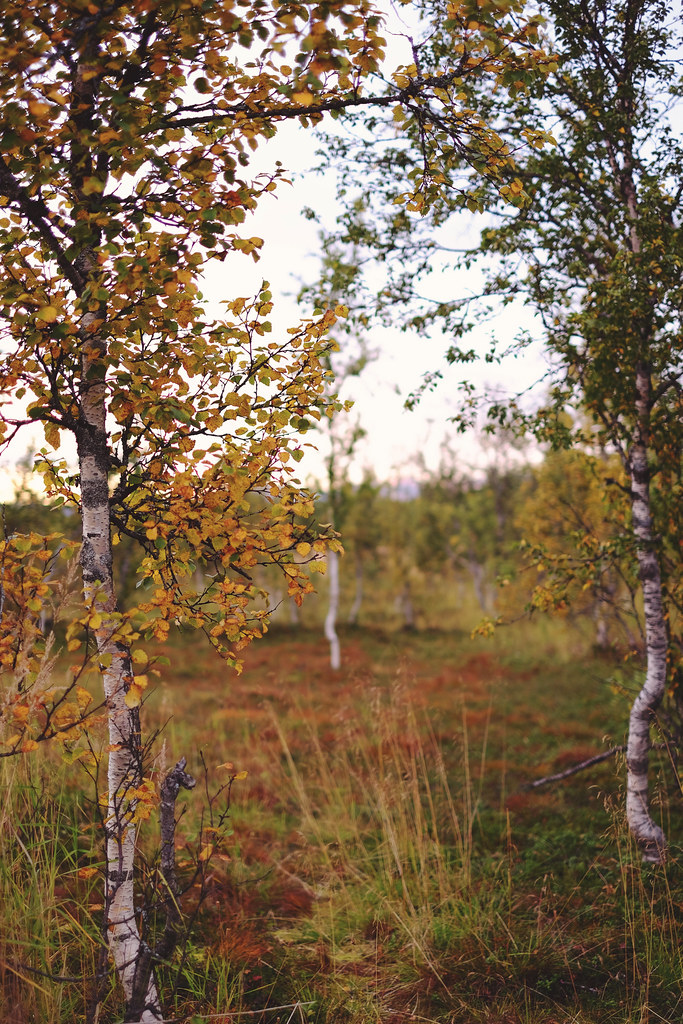 If October was “focused” last time I wrote, it got busy. Very busy. The last two weeks of October were my absolute busiest so far, and I’m hoping that the frenzied pace peaked with the two presentations I gave last Friday and I’m on the descent side of the slope now.

In between and around a bunch of schoolwork and an extra three-day course I took (focused!), I’ve continued to enjoy life in Tromsø.

I made pickles for the first time. I used the light pickling solution from The New Nordic and these were a delight (that’s radishes on the left and onions on the right). One of the bonuses of living in Norway is that I can basically find any of the ingredients used in that cookbook. I also made some fancy cookies which I can’t show you yet, but more on those later (edit: the piece went live, so now I CAN link you to those fancy cookies!).

I collected a few short video snippets I’ve been taking over the last couple of months into one video. It’s just snippets, but for the curious, here’s a glimpse of autumn in Tromsø:

Mørketida, which I mentioned in my last post, draws ever nearer (or is already upon us, depending on how you look at it). Daylight Savings Time ended here on October 25th, which very suddenly made the days feel much shorter. The sun set today at 2:30 in the afternoon and it’s really not long now before the sun disappears for the winter. One thing that makes the dark easier to cope with, though, is the northern lights that visit us when the weather’s clear. I don’t get tired of watching them from my living room window. I love how they often look like twisting green flames coming from behind the mountains to the east.

Another thing that makes it easier to cope is snow. About a week ago we had our first snow in the city. It started snowing on the 26th and by the morning of the 27th there were several inches on the ground. It stuck around for a few days before mostly melting away, but man, it was beautiful. From what I’ve heard, the snow-melt-snow-melt cycle is pretty common here, but after Christmas the snow is more likely to stick around (and it also starts to get lighter again, so that’s when skiing season really begins).

This city is absolutely charming covered in snow. It’s such a treat to see my daily landscape transform so dramatically. The university campus, too, looks a little bit more magical in the snow.

So between the northern lights, the dramatic skies, and the snow, I think I’m going to get by okay during the dark season.

What a few weeks it’s been! Busy, with lots of ups and downs, and still so much practical stuff to do… but I’m remembering what a difference it makes to my mood to be well-fed and to knock a few key things off the to-do list (especially those I’ve been putting off). So having just made myself a nice lunch after successfully tackling a rather daunting to-do list this morning, I’m on the up at the moment.

I forgot how it feels when you first move abroad – the way time marches forward, oblivious to the many, many things you need to do in order to start getting settled (and there’s a lot more of it this time around than there was when I was in Hungary). There are utilities accounts to set up and housewares to buy and errands to run and furniture to put together. The electrician needs to come by and see why the overhead light in the bathroom isn’t working properly. That piece of mail delivered to our box by mistake needs to be taken over to the post office. And I finally took care of getting a Norwegian SIM card this week only to learn after putting it in my phone and using it that I’ll be unable to text American numbers if my Norwegian mobile provider doesn’t have an agreement with the American mobile provider for that phone number (a problem I have never, ever had with Norwegian SIMs in the past). I forgot the way that all of those little things can start to add up and accumulate to make you feel like you’re having The Worst Day Ever. And Time doesn’t care, it marches on.

But that stuff starts to get dealt with, and it gets better, too (and, note to self: eating good meals regularly helps immensely). There’s so much to celebrate and be grateful for right now. School is going well and I love the little yarn store down the street. The nights are now dark enough for some of the stars to come out, and last night the aurora was out. I watched it from my bedroom window (my bedroom window!) for about an hour. It may seem trivial or frivolous to say this, but that is one of the things I have been looking forward to the most about moving here. The northern lights inspire a sense of childlike wonder in me in a way few other things do. The landscape here does it too, but the lights… the lights are magic.

I think that stuff, that sense of awe and wonder, is so important to life and mental health and feeling whole and fulfilled in this world. So for now, I’ll remind myself that the stuff that’s hard right now will fall away with time, and I’ll do my best to eat well and take care of myself and go easy on myself when I can. For now, that’s enough.