I can’t remember when I first encountered the work of Susan Crawford. I defnitely remember running into The Perfect Christmas Jumper while browsing Ravelry in the early days of my membership, and the Trimmed with Roses jumper has been floating around in my memory for a very long time too, but it’s hard to pinpoint an exact moment. Nonetheless, Susan’s name is one of those that sits in my brain along with several other influential designers like Kate Davies, Ysolda Teague, and Norah Gaughan as some of the first designers I became aware of and interested in following as I became more and more interested in knitting all the time in my late teens.

This is part of why, when I decided to go to Edinburgh Yarn Festival two years ago, the only thing I booked a ticket to beyond the marketplace wasn’t a class, but a talk – one Susan was giving on an ongoing project called The Vintage Shetland Project. (It turned out to be a very good thing indeed that I didn’t book any classes, since I broke my shoulder a week before the festival!) The project involved a book-in-progress, but it was so much more than just a book project. Now that the (absolutely incredible) book has finally come to fruition, I couldn’t not share it with you. 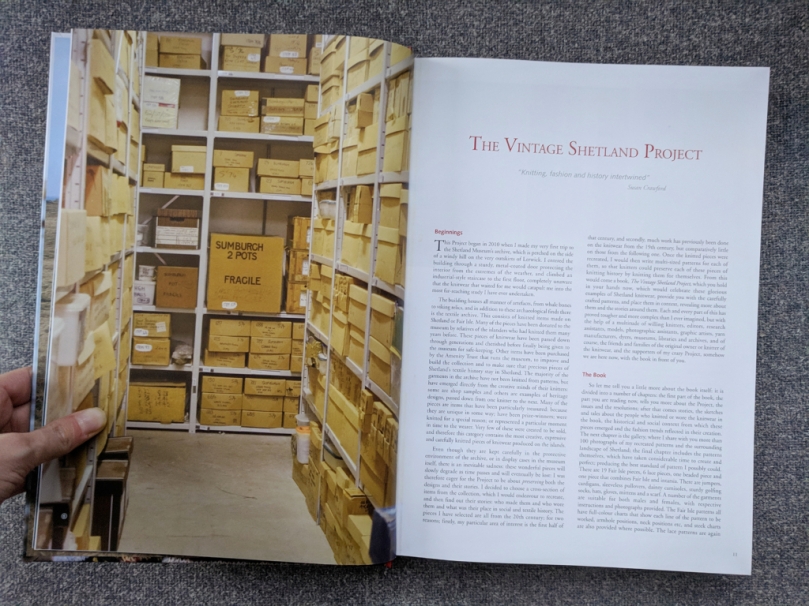 When I attended her talk in Edinburgh, I got to hear firsthand about the 27 unique pieces in the Shetland Museum archive that Susan had selected to recreate – and then for each one, after the original piece had been painstakingly reconstructed and a new sample made, the design was graded and patterns written. This book is the culmination of eight years of intense work and it’s difficult for me to even wrap my head around how much has gone into it. I don’t want to go into too much detail here because Susan has talked about the scope of the project elsewhere – I highly recommend checking out this interview with her on Fruity Knitting (part 1 of the interview starts around 12:47; part 2 starts at 54:35), as well as this gorgeous behind-the-scenes video made by Susan’s daughter, Charlie Moon (who is also one of the models in the book). I can only say that when my book finally arrived the other week, I actually started crying with joy.

I did want to share a few glimpses of the pages inside, since the diversity of the 27 pieces is rather remarkable. There are garments and accessories: cardigans, pullovers, sleeveless tops/vests, hats, gloves, mittens, and stockings. I thought I would start with this lovely cardigan below.

This piece is called Vaila, and it’s named for the island in the Shetland Islands where the photoshoots for the book took place. I love the striking color combination, and I love how it’s been styled on lovely Ella Gordon.

Unsurprisingly, there’s lots of Fair Isle to be found within the pages of The Vintage Shetland Project, all beautifully photographed by Susan. The tam pictured here is called Twageos. The gallery section of the book also features photos of the surroundings on Vaila, including that rather magnificent Shetland pony on the right.

There are also some lovely lace pieces, and I’m pretty enamored with this cardigan, which is called Marianne. 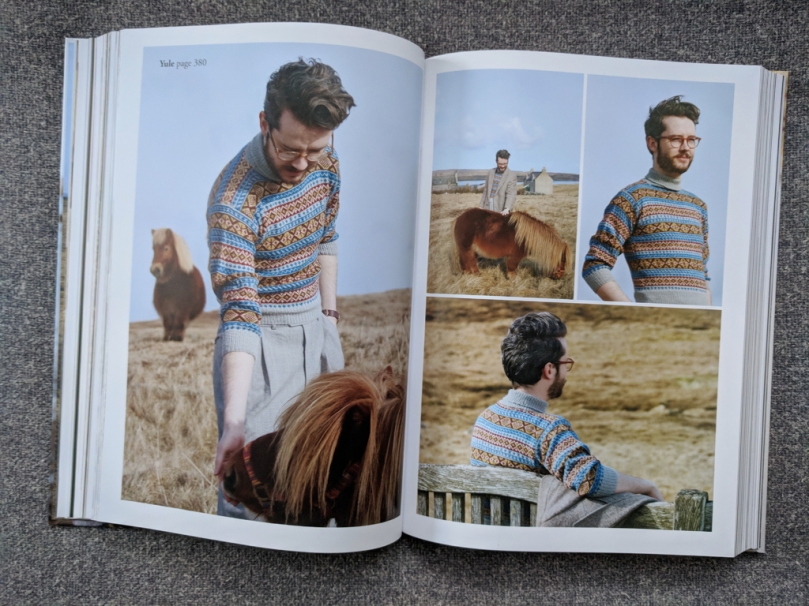 The piece that has completely stolen my heart, however, is this Fair Isle turtleneck called Yule. I love that they’ve shown it on both a man and a woman, and I absolutely love both the colors and the fit of this piece. I have most of the right colors in my stash in Brooklyn Tweed Loft, which isn’t the best match for the pattern (which calls for either Jamieson & Smith Shetland Heritage or Susan’s own Fenella 2-ply), but I know I can get gauge. The gauge is quite small (32 stitches per 4″), which in Loft I can achive on a 2.25mm needle, so I may want to wait a few months before I embark on such a small-gauge allover colorwork project. Nonetheless, I have a feeling I’ll be casting this one on sooner than later once I pick up the three additional skeins I need. I just love it so much.

The patterns are slowly being added to the Ravelry database (as someone who knows what goes into adding a good pattern page to Ravelry, that is no small feat for 27 patterns) but for now you can see all 27 samples in the lookbook here, if you’re interested in seeing more.

The first section of the book is made up of nearly 100 pages of historical background – both about the specific pieces recreated in the book and Shetland knitting in the time period that is Susan’s focus here (the 1920s through the 1950s) as well as knitting farther afield. I’ve spent several mornings in the past few weeks reading a chapter or two with my morning coffee, and it makes for excellent reading for anyone interested in knitwear history or the history of the knitting industry. Susan has done an incredible amount of research and she’s really presented it in a top-quality full color hardback that is a pleasure to read or simply to flip through for inspiration.

The book is available from Susan herself over on her website, and there are a few shops out there stocking it as well.

Even though I linked it above, I’ll end this post with the video made by Susan’s daughter, Charlie Moon. I first saw this film at Susan’s talk two years ago and it’s absolutely gorgeous. If you have a few minutes, I hope you’ll take the time to watch it too, and be transported to Vaila.

The Vintage Shetland Project from charliemoon on Vimeo.