There were several other Lofoten-related things that came to mind as I was putting together the Lofoten Wool post, but I didn’t want the post to get too long and I really wanted the yarn and its relationship with the landscape to be the focus. So I decided to save these little bits for a new post – and I hope you enjoy these too.

First up, there are a few Lofoten-related segments from a TV show called Norge Rundt that I thought some of you might enjoy seeing. I’m pretty sure you should be able to stream these outside Norway, because I have memories of watching Norge Rundt from time to time when I still lived in Seattle. The show’s name means “Around Norway” and the format is made up of relatively short segments from some place or another, meeting a diverse array of people who do all kinds of things – and you usually jump around the country a bunch within a single episode. The show is still on today, but I’m particularly fond of the older episodes found in the show’s archives, and the clips I have to share today are both of that variety. The audio is in Norwegian only, but the visual experience alone is worth it, so don’t let that dissuade you if you don’t speak Norwegian: 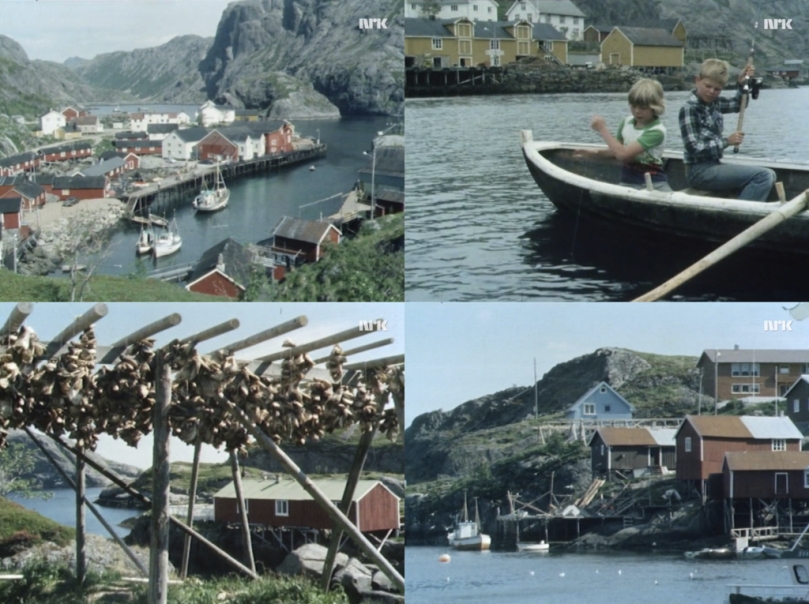 Clip 1: In my last post I mentioned the fishing huts where fishermen would lodge, called rorbuer, and how they mainly cater to tourists now. This clip from 1978, entitled “rorbuferie” (fishing hut holiday) covers that very topic, along with some stunning footage of Lofoten in the summertime. You’ll have to click through to the NRK website to watch it. 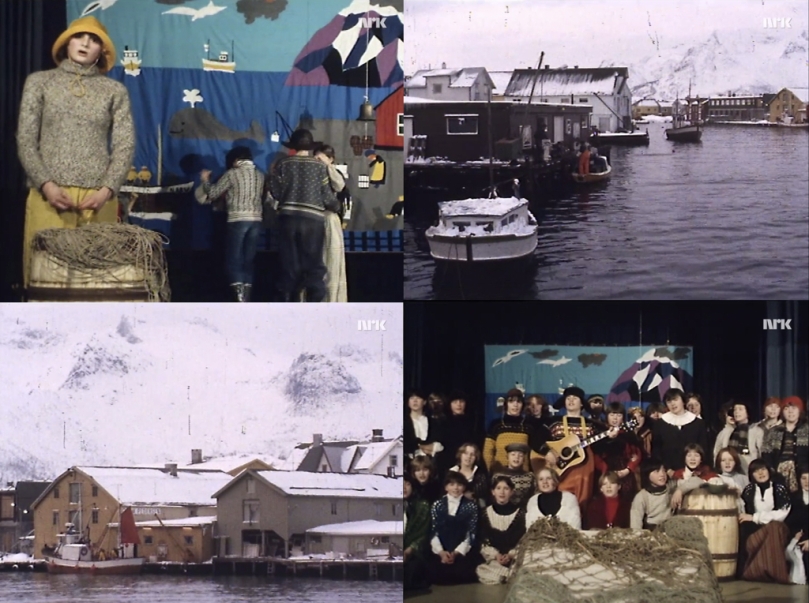 Clip 2: This is a pretty endearing segment from 1979, which starts off with a voiceover about how the number of fishermen and of fishing boats in Kabelvåg is steadily decreasing, just like many other towns in Lofoten – “mange begynner etterhvert å glemme hvordan Lofotlivet i gamle dager var,” he tells us, or “many are beginning to gradually forget what Lofoten life was like in ‘the olden days’.” So the kids and teachers of the local school decided to host a big event about what life used to be like in Lofoten. Their stage performance features a handmade backdrop, adorably goofy singing, and lots of fantastic knitwear – all of which prompted my husband to ask “Wait, are we watching a Belle & Sebastian video?” when the girl in the yellow sou’wester showed up on the screen. (Fun side note: Belle & Sebastian have totally been to northern Norway, actually). But I love a community coming together to take a look back and remember what life was like in the not-so-distant past – with young people stepping up to take care of their traditions. Again, click through to watch the clip on the NRK website.

Given the dates of both of these clips, it’s worth pointing out that just like in Shetland, the 1970s was a decade that transformed sea-based industry in Norway after the discovery of oil on the continental shelf. I feel like both of these clips point to that changing landscape. (It also brought to mind the exhibition Ella Gordon put together for the Shetland Museum back in 2014 about Shetland knitting during the oil boom.)

Artwork was another theme that came up when I was thinking about Lofoten. Some of my favorite Norwegian artwork features scenes of northern Norway, and I thought I’d share a few pieces that to me, really manage to capture the place. 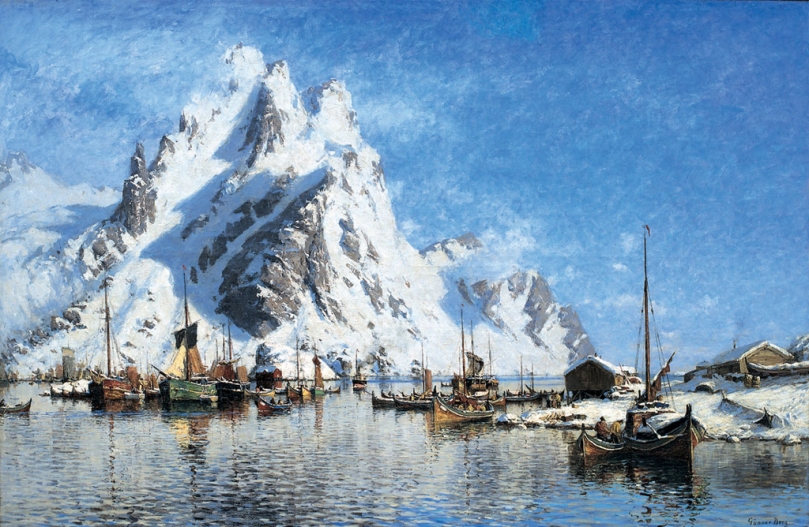 Winter Morning in Svolvær by Gunnar Berg, 1887. Berg grew up in Svolvær, which is also where the landscape photos in the last post were from. Berg really captures the light, and the brilliance of the white snow against a blue winter sky. The misty clouds and the masterful reflection in the water are so atmospheric. 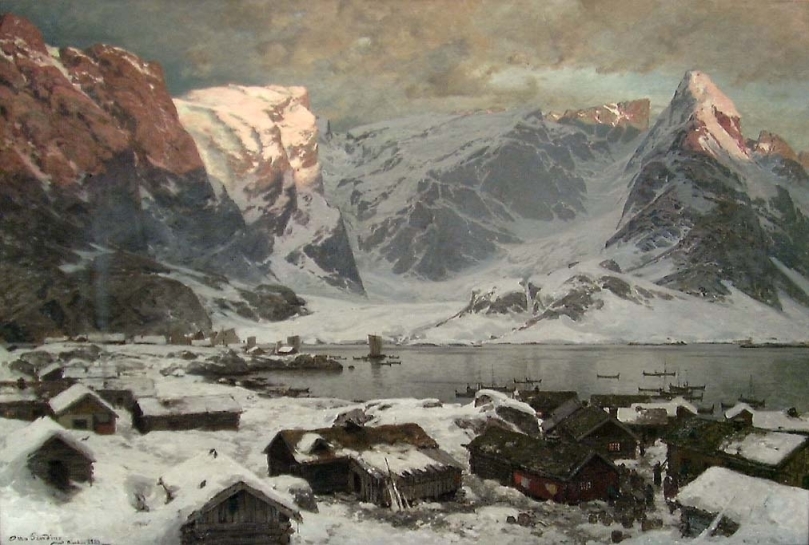 From Reine in Lofoten by Otto Sinding in 1883 (courtesy Digitalt Museum). Sinding’s paintings of Lofoten manage to capture the feeling of the size and scale of the mountains in a way that photos can’t seem to do. I love the low winter light in this one, and the way the reflected sky is a steel grey. These are all the things I love to notice in my changing surroundings as the light changes at different times of year. 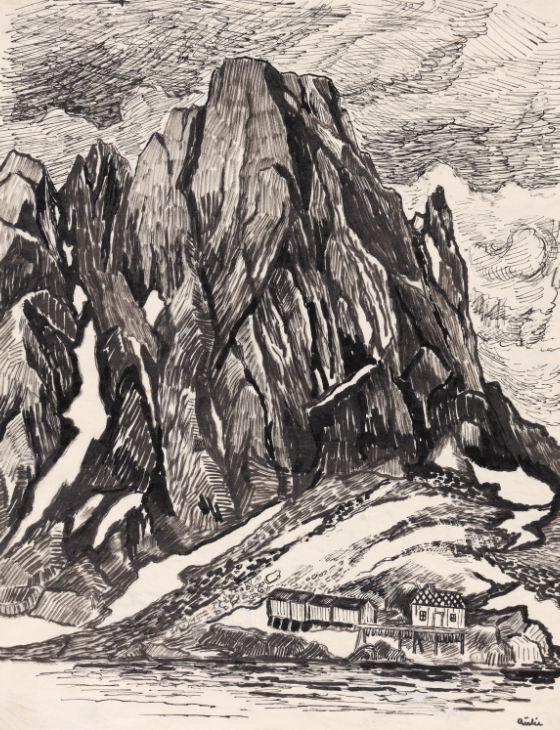 And for something completely different, I love this piece by Reidar Aulie. This is Lofoten, tall rock formations, from some time after 1922 (courtesy Digitalt Museum). The first thing this piece brings to mind for me is some of J.R.R. Tolkien’s artwork, and given that they were very nearly contemporaries (Aulie was 12 years younger than Tolkien) that’s not entirely surprising. It’s just pen on paper, but it’s beautiful. The Tolkien pieces this one brings to mind are Caerthilian Cove & Lion Rock and Cove near the Lizard, both scenes from Cornwall which can be seen on this page, as well as in the book J.R.R Tolkien, Artist & Illustrator, which is where I was introduced to them. 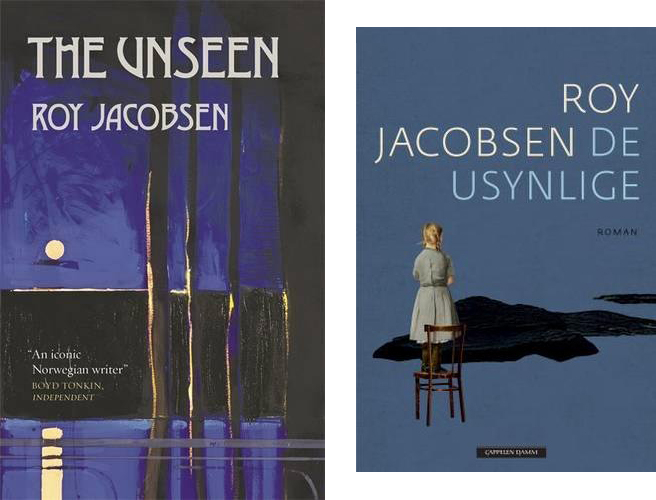 And last but not least, I wanted to mention a book I’ve just finished reading, which was a Christmas gift from my friend Anna: The Unseen by Roy Jacobsen. She gave me a copy in the original Norwegian (De usynlige), and she described it along the lines of being a sort of quintessential northern Norwegian novel. It follows the story of a girl who grows up on a small island, home to her family and her family only. They have a small farm, and her father goes to Lofoten to fish every winter. The content from page to page is very everyday sorts of stuff for much of the book, which makes it an excellent novel for someone interested in what life might have been like on a small Norwegian island in the gamle dager, the old days. It’s available in English as The Unseen (linked above), and I’m incredibly excited that the English translation just made the longlist for the 2017 Man Booker International Prize.

Thanks for indulging a little bit of Lofoten exploration on the blog today.