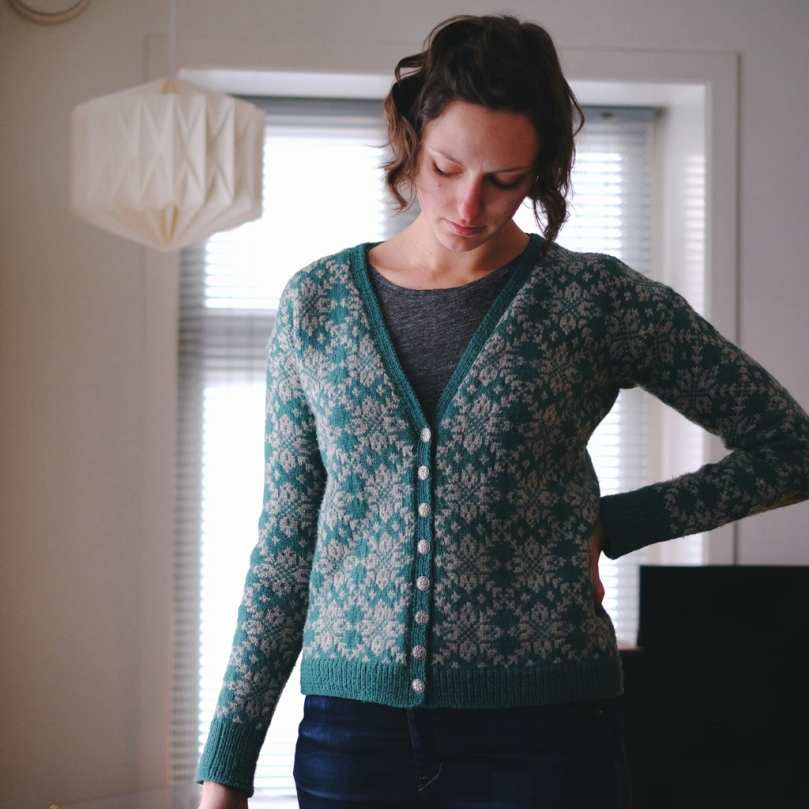 I’ve been meaning to get around to this post for a long time, but I had to let go of my vision for a grand snow-related photoshoot to make it happen (in the midst of my master’s thesis, that’s really not realistic, even if I think this cardigan deserves a grand photoshoot). So I finally got some shots – just at home, by the window in my apartment – of my finished Sandneskofte. This was my last FO of 2016, finished just in time for Christmas, and I’ve been wearing it very regularly ever since then.

I’ve mentioned it on this blog a few times – here, for example – but if you weren’t following along in Instagram, I thought I’d share a few details. This pattern is from the Norwegian book 42 norske kofter (blogged here) and my version is heavily modified. First of all, it calls for fingering weight yarn but I substituted with a heavier yarn – Kate Davies’s absolutely gorgeous Scottish wool, Buachaille, in the shades Islay and Haar. This is a fantatsic wooly wool, and I am so excited to make more things using this yarn in the future – serious kudos to Kate for spearheading the production of such a beautiful domestic British wool yarn (sourced in Scotland, spun and dyed in Yorkshire). 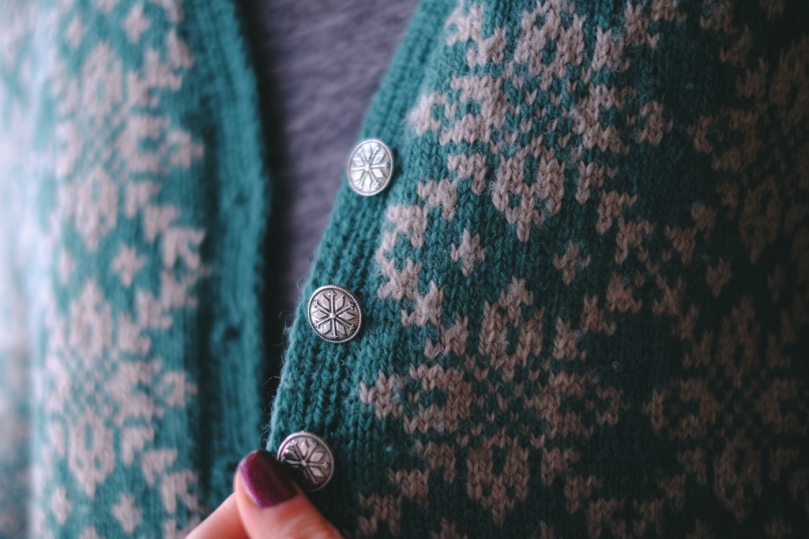 Like all traditional Norwegian kofter, this cardigan is knit in the round and then steeked to create the front opening and the armholes. The Buachaille did beautifully with the steeking (and no surprise there). For those who are interested in more construction details: the body and the arms are worked separately from the bottom up, and the sleeves are sewn into the armholes after the opening is made. The pattern is for a crew neck cardigan, but I opted for a V-neck, so I began decreases after reaching a certain point on the body. Stitches were bound off for the back neck, the front openings and the armholes were reinforced before being cut open (I used the crochet method, although a sewing machine is the typical tool used in Norway), and then the shoulders were seamed before the sleeves were sewn in. The stitches for the vertical button bands were put on hold after the bottom ribbing was finished, then when the rest of the cardigan was done, the stitches on hold were put back on the needles and the button bands were knit back and forth separate from the body before being sewn on. There was a lot of finishing work for this piece – right down to the eight buttons I sewed on the front. 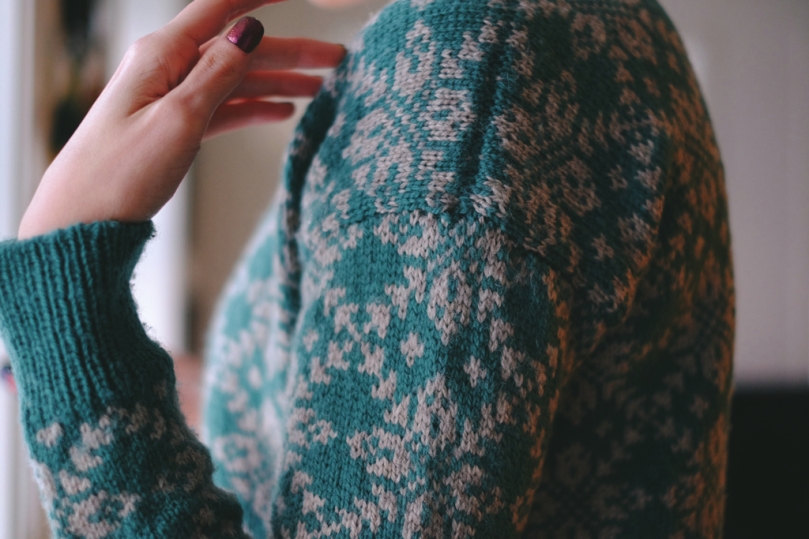 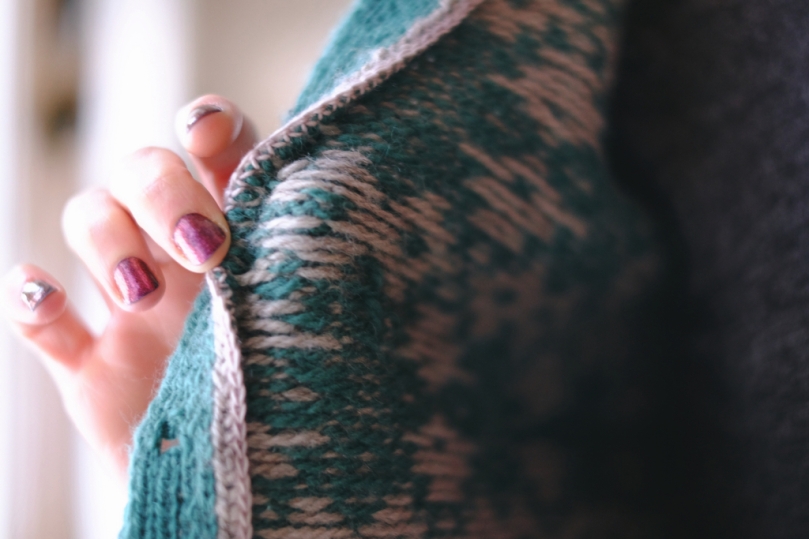 I originally intended to finish the steeked edges on the inside of the fabric with some decorative ribbon, but I never go around to it (for one thing, I never came up with a clever way to deal with the angle where the straight body bends to form the V-neck) and the unfinished edges have put up absolutely zero fuss, so I will most likely leave them as-is. In the photo above you can see the light grey yarn I used to work the crochet reinforcement where I’m folding it away from the fabric, but it normally sits flush (as it does in the bottom of the photo). The cut edges of the fabric haven’t budged, and I probably wear this cardigan a couple of times a week. I can heartily endorse using Buachaille for steeked projects!

Even though I would consider myself a fairly accomplished knitter, this project still managed to check several boxes on the list of firsts. This was my first allover stranded colorwork garment, my first time steeking a cardigan opening (I had steeked armholes, but never the front of a cardigan), and my first time knitting a vertical button band (and I was very grateful for Karen Templer’s “How to seam a button band” post). Even though colorwork is my usual wheelhouse, it goes to show there’s always room for building new skills. 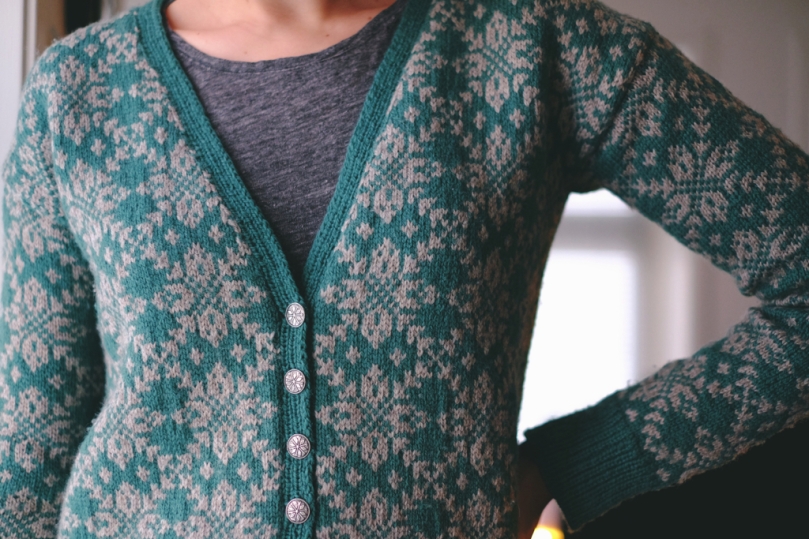 There are a few more photos of the details as well as several in-progress photos over on my Raverly project page, if you’re interested. This cardigan isn’t perfect, and there are things I would change if I were to knit it again, but I love this thing. The double thickness of the stranded fabric knit at a tight gauge means it’s quite warm and it’s been super useful all through the Norwegian winter, and I look forward to wearing it for years to come.

ETA: I should mention that Kate Davies will be at Edinburgh Yarn Festival this coming weekend, just in case you’re lucky enough to be going and you want to check out the yarn in person for yourself!