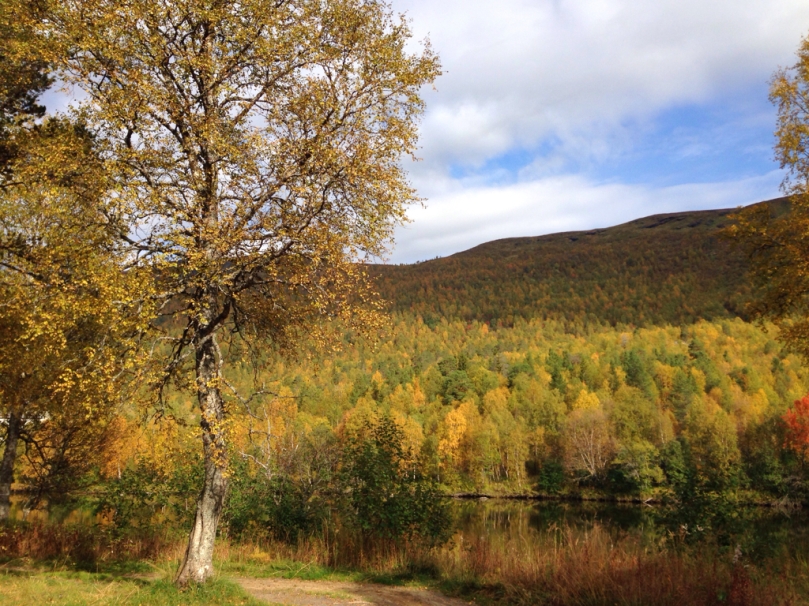 I’m recently back from a whirlwind trip around Nordland, the Norwegian fylke (county) just to the south of Troms, the county where I live. We’ve had some dear friends visiting from the states, and it seemed like a great opportunity to get ourselves off the beaten track and show our friends a nice cross-section of northern Norway. We were lucky to have some very nice weather and the autumn colors were pretty spectacular, all of which we got to enjoy from planes, trains, and automobiles – and on foot too, of course.

Nordland is long and narrow from north to south (the mainland part is so narrow that one of its larger fjords, Tysfjord, ends just 6km from the Swedish border), but it’s also home to the famous Lofoten archipelago. The Arctic Circle also cuts through Nordland. We began our journey with a train ride from Bodø to Mo i Rana (after flying to Bodø – there’s no train that goes to Tromsø)*, where we rented a car and started heading north. We stayed somewhere new each night and the drives were short, which meant there was time for long pit stops or detours depending on how we were feeling each day – it’s an approach I can highly recommend. A few highlights: 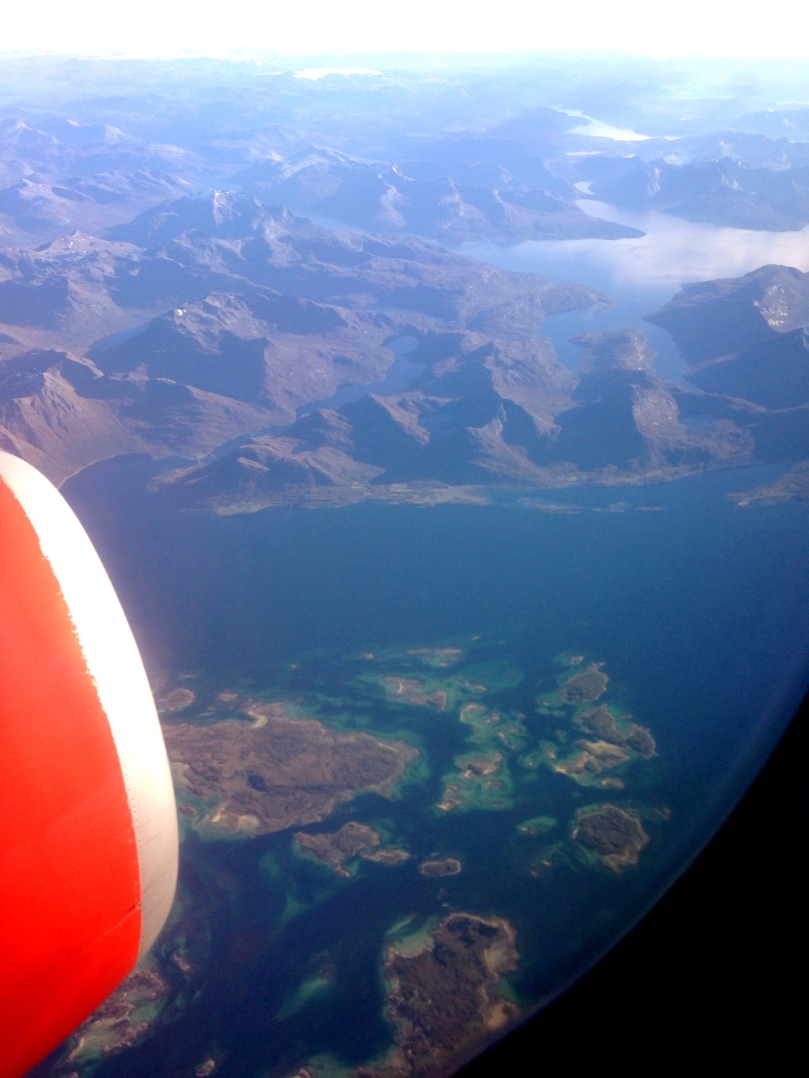 The flight! Flying over northern Norway on a clear day is always a special treat. Tromsø to Bodø is just a quick 45-minute hop. 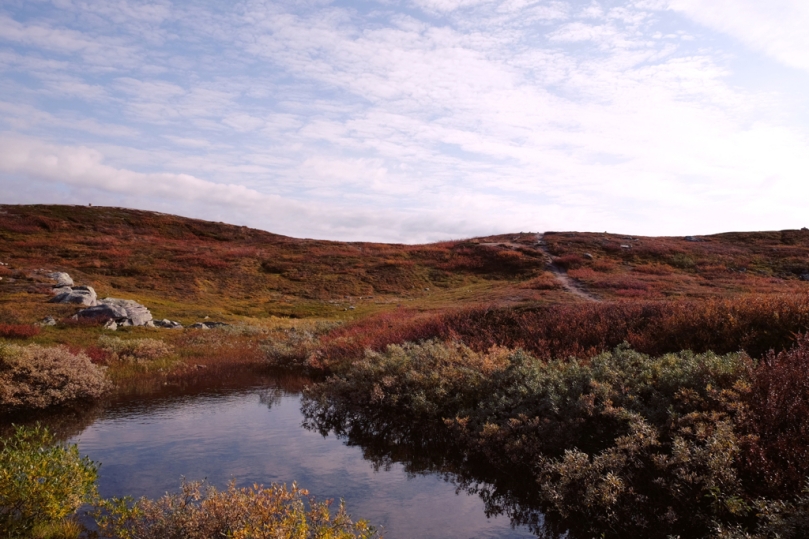 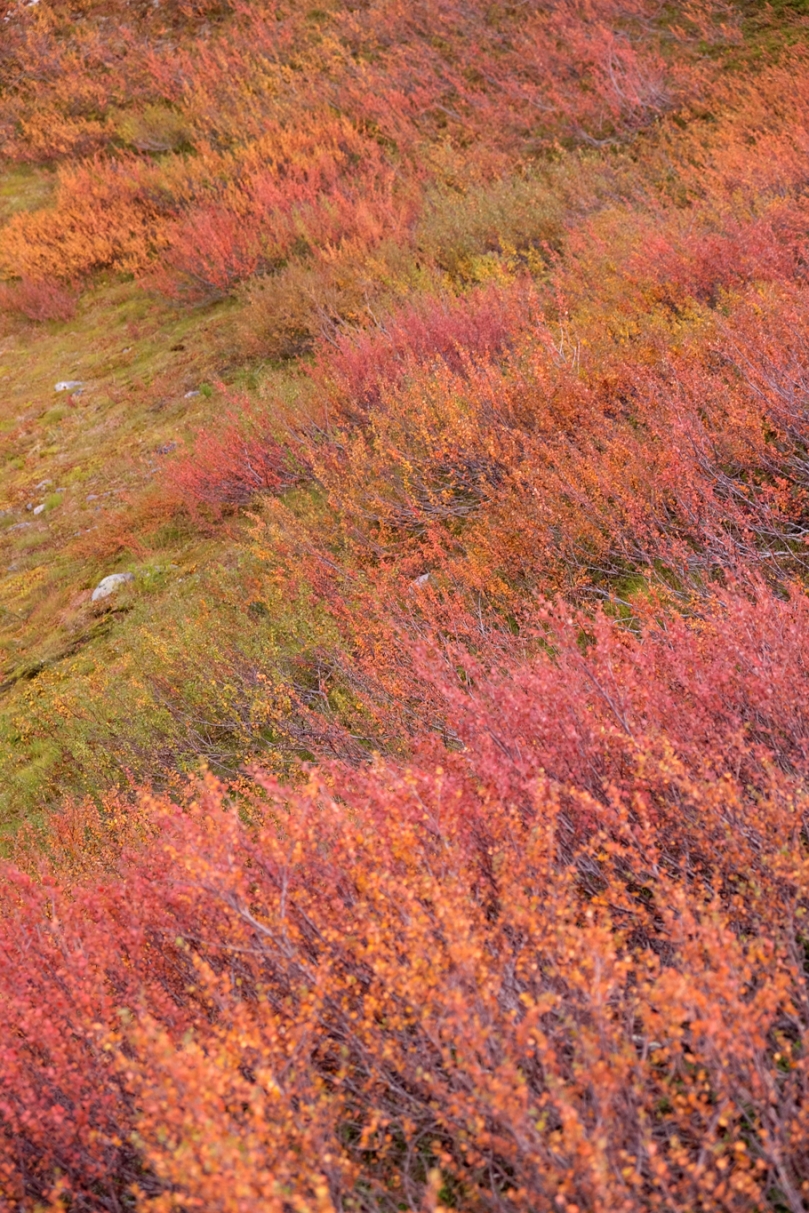 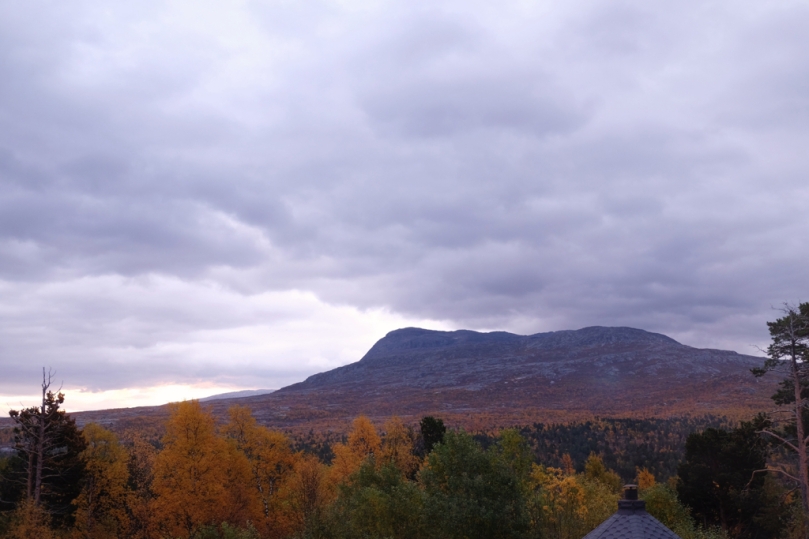 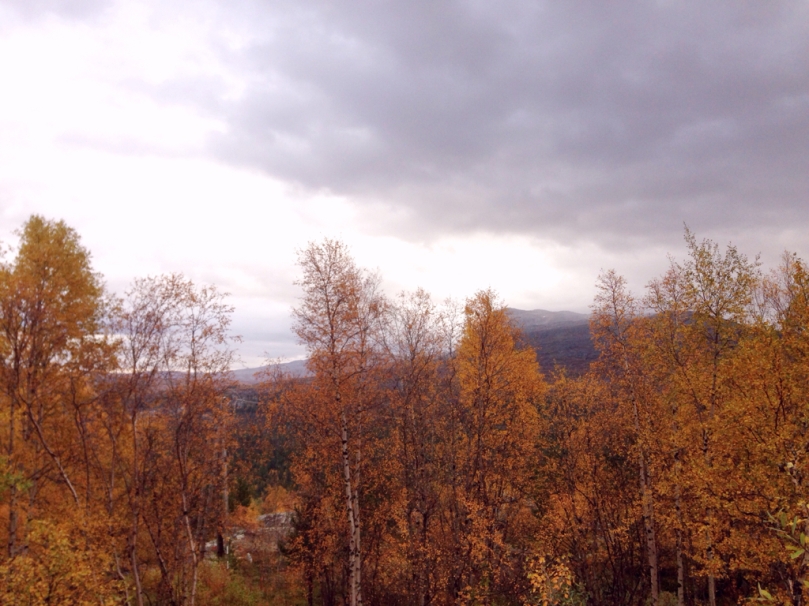 Saltfjellet is incredibly unique. The area surrounding this mountain range is all national park, and I’m so glad we got to spend some time here. Going north meant a stop at the bizarre gift shop at Polarsirkelsenteret (situated at the Arctic Circle) before we made it to our lodgings for the night, the charming Saltfjellet Hotell Polarsirkelen (which has a great big common room that’s lovely for knitting or reading, for the record). The hotel is surrounded by nature, and it’s a short walk from the Lønsdal train station if you don’t have a car. This area is incredible for hiking, and the colors are just beautiful in autumn (I feel very lucky that we got to see it like this – as the woman at the hotel said, “one windy night and it’s all gone!”). 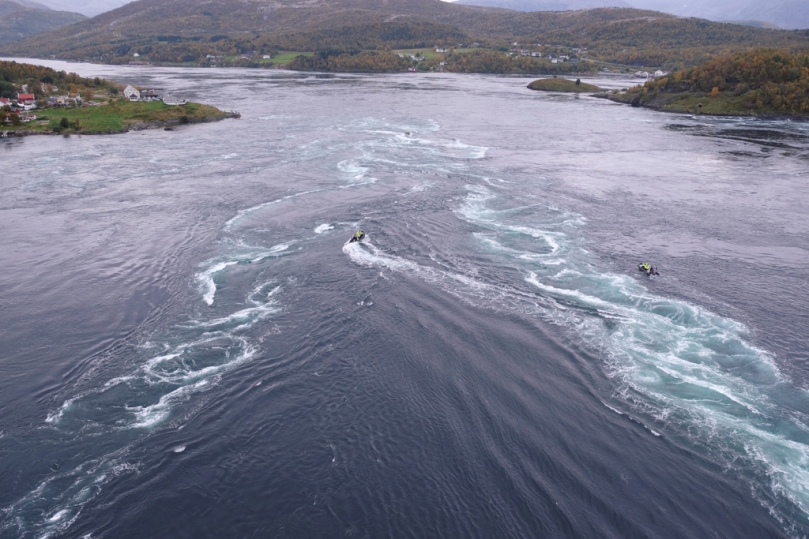 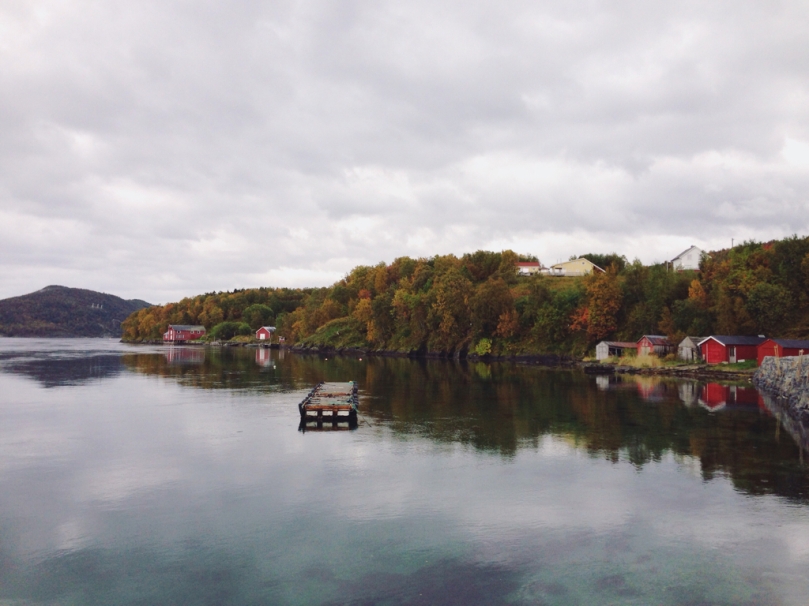 Saltstraumen has one of the strongest tidal currents in the world, and I’ve been looking forward to seeing it in person for a long time. We arrived at just the right time, as the tide was changing, and the speed of the water and the meandering whirlpools were difficult to wrap my head around. We also got to see some “Saltstraumen safari” boats zig zag and run circles across the water. We stayed a night here at a rental cabin, but on the quiter side of the water at Saltstraumen Brygge (on the peninsula just to the south of the strait – that was our view in the photo directly above). 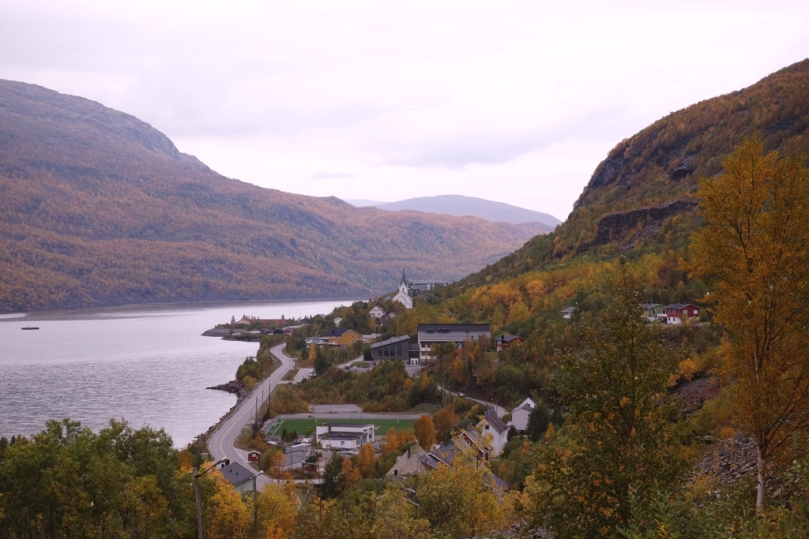 Visiting the former mining town of Sulitjelma tucked into the inland mountains on a lake is an experience I’m unlikely to forget. We weren’t able to walk through the mine museum, but as mining was an active industry here until 1991, the traces were easy to see.

And one last highlight: we took a Hurtigruten boat from Svolvær back to Tromsø, and were blessed with clear weather and some very active northern lights that night. Unfortunately, a moving boat + long exposures don’t make for the best photos, so I left my camera in the cabin.

Aside from the stops, the drives themselves were just beautiful. It’s hard not to love long drives down tree-lined roads at this time of year, especially when the pit stops are also beautiful. 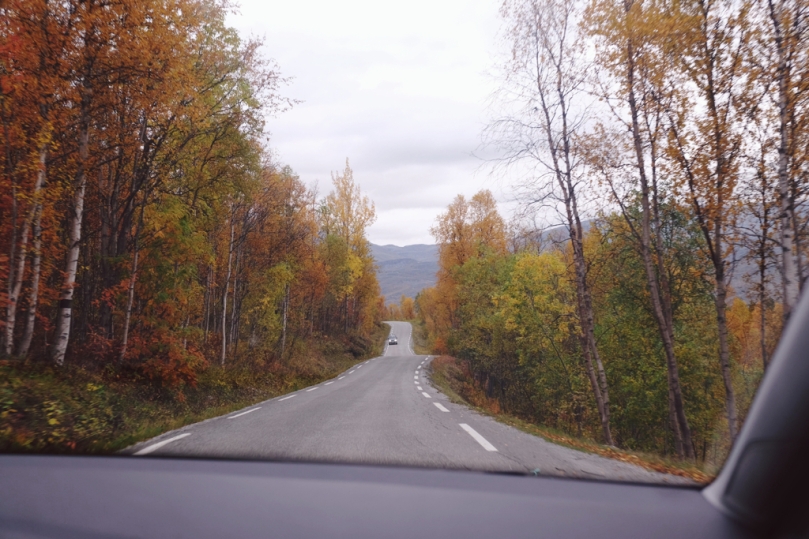 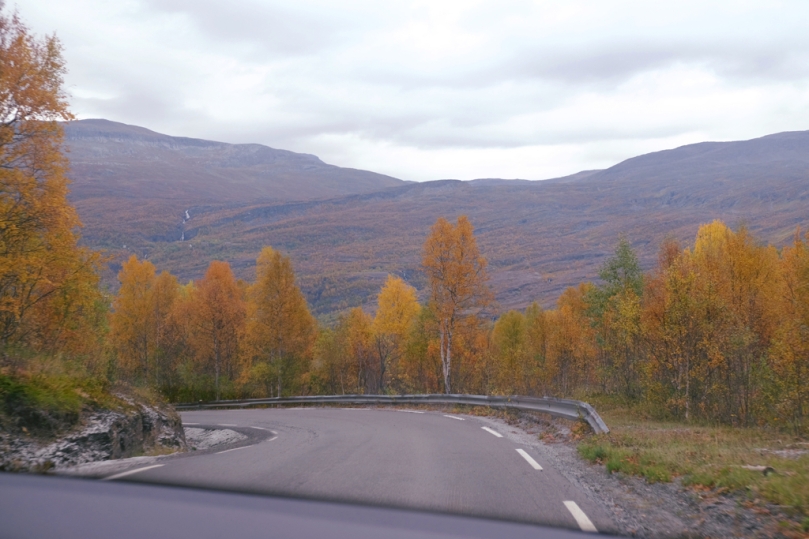 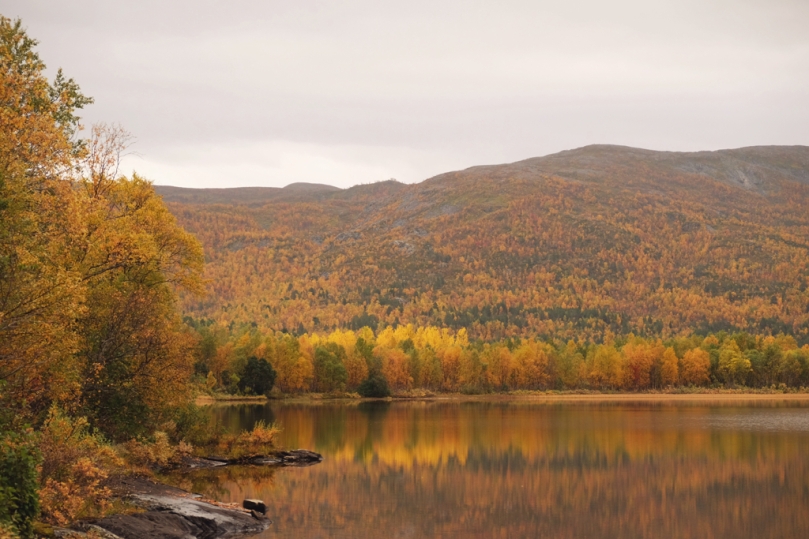 * After having watched Nordlandsbanen minutt for minutt (the slow TV program produced by Norwegian national broadcaster NRK that documents the train journey from Trondheim to Bodø) multiple times, I was really excited to spend three hours on the northern end of the route. Someday we’ll do the whole thing. The full journey is 10 hours – I often put it on TV in the background when I’m working, as it’s relatively meditative background nosie – and you can check it out here (for free) on the NRK website if you’re interested.