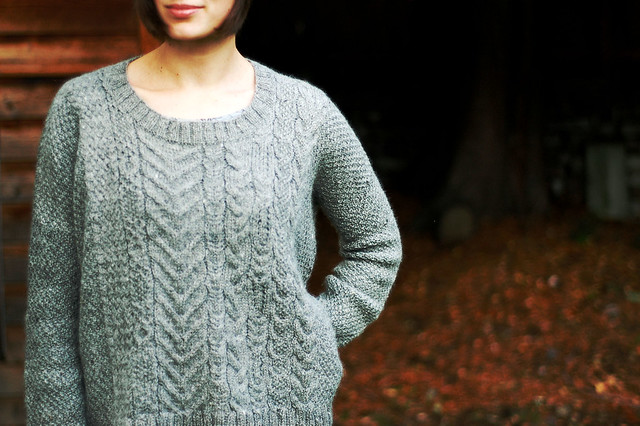 I remember moments from before I was a knitwear designer, particularly when I was in college (and probably putting off writing a paper), when I would be knitting something and think to myself, Wouldn’t it be awesome if I could just knit all the time? Wouldn’t it be great if that was my job? I don’t think I’m alone in that, but it’s the minority that actually decides to turn knitting into their job. It probably takes a certain amount of crazy, and I guess I’ve got that.

Of course, the reality of being a knitwear designer, even for the handknitting industry, involves a lot more than just knitting. It involves a lot of math, for example (that’s okay, I like math). Pattern writing, photography, formatting, editing, pattern support, teaching and putting together tutorials… the list goes on. Still, for most of us, it also involves a lot of knitting. One of the things I didn’t realize before I started working professionally in this industry was how my relationship with knitting, and my own skillset, would change. I was a fast knitter to begin with, but I got faster. The sheer amount of stuff I’m technically able to crank out is kind of mind-boggling. For me, this has led to a tendency to have too many projects going at once – like, twelve or more – because the faster I knit the more things I want to cast on. In theory, it sounds like a great ability, to be able to fly through projects, but I think it’s not all it’s cracked up to be. The more things I knit, and the more it feels like my own personal production line, the less special each knitted item is. I don’t always have time to get to know the piece as I work with it.

And then there’s work knitting vs. personal knitting; even when I’m publishing a pattern in-house and the sample will be staying with me, it feels very different when I’m knitting a piece for work than when I’m knitting a purely personal project (which may be for me or for some other recipient, but it’s not for work). I certainly wouldn’t claim that all designers feel this way – I have no idea how most other designers feel about it, really – this is just my experience. And so it’s important for me to have personal projects to work on or I  start to forget why I love knitting in the first place. And as I’ve come to this realization in the course of the last year, I’ve realized that many of my favorite knits are the ones I’m forced to go slow with: big projects without deadlines that might get set aside for awhile. Other knits may come and go, but that kind of project is always there for you (corny, I know, but true). Not only do those projects require patience, but they won’t end up in a trunk show winging their way around the country at any point. While it’s incredibly fun to think of one of my samples traveling the country, and I’m incredibly proud of the work that I do, at the end of the day, my favorite knitting is the knitting that isn’t work. 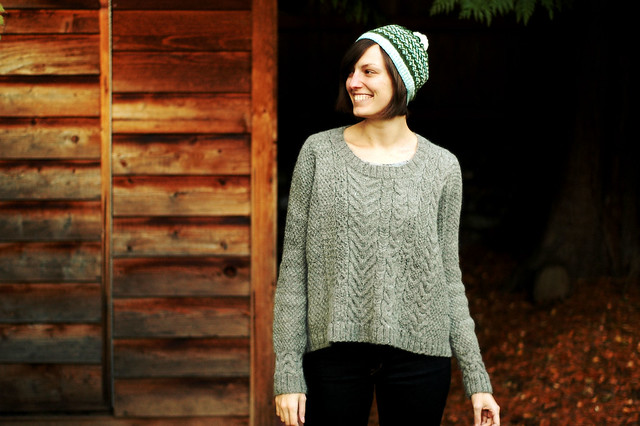 All of that was a wordy, rambling way to introduce a recent FO that I’m pretty enamored with. When the autumn issue of Pom Pom Quarterly came out last year in 2013, I immediately fell in love with Quadrillion by Meghan Fernandes. I knew I wanted to make myself one, but I was right in the middle of getting my F/W collection ready, in addition to prepping for my booth at Knit Fit and getting ready to promote my patterns in Wool People 6 and the winter issue of Pom Pom. I knew it would have to wait a little while.

Meghan’s version is knit in a beautiful vibrant blue from The Uncommon Thread, a light DK-weight Blue Faced Leicester which is probably lovely to work with, but I realized at some point in January that I already had the yarn I wanted to make this with. My booth at Knit Fit last year was right across the walkway from Jorstad Creek, and there was a great big pile of beautiful grey wool that kept catching my eye. Sometime during the second day of the marketplace, I walked over and purchased a sweater’s quantity of undyed Finnsheep wool yarn, a sport weight, without having any idea at the time what I would make with it. Two or three months later I had figured it out. Woolly cables! By March, I’d swatched and cast on for the front.

Cables slow me down anyway, so perhaps this project was destined to be a slow one. Eight (!) different cables run up the front (not quite a quadrillion, but it felt like it at some moments), with different repeat lengths requiring judicious use of post-its or washi tape to keep track of one’s place. The front was the slowest, and it got pushed aside at several different points when projects with deadlines cropped up, or I was traveling, or I was working on my Svalbard, or I just got tired of cables. I finished the front in September, and then I had the back and the sleeves knit within the next two months. But then it was done! And I’ve been wearing it nearly nonstop ever since. 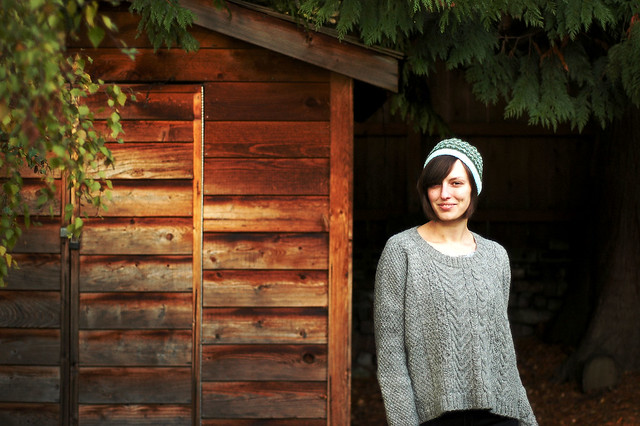 A lot of the knitting that I do doesn’t challenge me anymore, which is great from the standpoint of needing to get samples knit by deadlines, and that kind of thing, but not as great when I consider what I like about the act of knitting, and about learning about knitting. In a technical sense, this sweater wasn’t necessarily a challenge, but it challenged me in other ways, particularly in my patience and commitment. My investment was greater, and I think that’s part of why the reward of wearing it is so sweet.

The work/life balance is still a constant struggle for me, as it is for many who are self-employed or working on a freelance basis, but I’m working on it. Special thanks to my friend Lee for the photos!

Pattern: Quadrillion, by Meghan Fernandes
Yarn: Jorstad Creek Finnsheep Wool
I made the second-smallest size, and other details like needle sizes used and modifications can be found on my Ravelry project page. The hat I’m wearing is Fjordland, from Pom Pom Winter 2013.